Update: July 10, 10 a.m. – BC Wildfire Service has classified the wildfire as out and the incident is no longer active.

2:06 p.m. update – This fire is being referred to as the Kirton Fire. The fire is .4 hectares and is considered out of control, according to the BC Wildfire Service. Crews are on the scene with helicopter assistance.

A small fire that is burning to the west of Whitecroft has been reported to the BC Wildfire Service. Social media posts this morning show a helicopter attacking the fire with water, and the fire was added to the B.C. Wildfire Dashboard at around 10:30 a.m. this morning.

Martin McQuad, fire prevention officer for Sun Peaks Fire Rescue (SPFR), said the organization received several reports on the fire, which they passed along to the Thompson-Nicola Regional District (TNRD). The fire in question is in the TNRD’s jurisdiction.

The fire is thought to have started with last night’s lightning strikes, and McQuade said at this point it is not considered a threat to Whitecroft or the resort.

“I don’t see it posing a threat at this time,” he said. “With the [current] weather indices… wouldn’t see any reason for it to spread quickly. There’s not high winds and there’s not hot weather and the moisture index is up pretty high”

McQuade added  the fire was reported near a cutblock high in the mountains, which can help with the effort to put it out.

“That is probably the most accurate form of data you can take,” he said, adding that the rating is based on information gathered at a dedicated weather station located on the mountain.

Reached this morning, Noelle Kekula, fire information officer for the BC Wildfire Service, said she did not have any specific information on the Whitecroft fire to offer. She added the organization is effectively triaging fires based on their threat levels.

“We’re in the middle of a triage,” she said, noting last night’s lightning storm. “We are triaging from the fire reports that we receive and assessing them based on if life is threatened, if properties are being threatened, and if critical infrastructure is being threatened.” 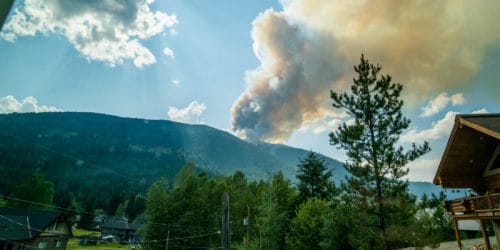