RCMP are reminding drivers to be aware of wildlife when driving, following a car rollover on Sun Peaks Road near Whitecroft.

Emergency crews attended a single-vehicle-incident at around 2:50 p.m. on Wednesday, August 26. The driver of the vehicle was heading eastbound when a deer allegedly ran in front of the vehicle, causing the driver to steer off the road, crashing into the embankment and flipping the vehicle.

Sun Peaks Fire and Rescue attended the scene and removed the vehicle door to free the injured driver, who was transported to Kamloops Royal Inland Hospital with neck and back injuries.

RCMP Senior Sergeant Doug Aird said deer were particularly common on the road to Sun Peaks, and reminded drivers to check their speed and drive to the conditions.

“There’s a lot of wildlife activity at this time of the year.” 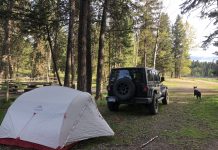