“We don’t anticipate any further spread beyond the existing or predetermined boundaries due to weather and suppression tactics.”

The wildfire currently sits at 4.5 hectares and the 15 BC Wildfire Service crews remain at the site.

4:45 p.m. update — The Dick Hart Memorial Park wildfire has now grown to 3.3 hectares. BC Wildfire services said some of the growth of the fire can be attributed to “small scale hand ignitions conducted by ground crews this afternoon to bring the fire perimeter to natural control lines.

Fifteen personnel are on now on the scene working to establish a hose lay around the fire’s perimeter.

The next update is scheduled for 8 p.m.

BC Wildfire Service (BCWS) crews are responding to a 1.1 hectare wildfire at Dick Hart Park, located near Heffley Creek. While currently classified as “out of control,” eight crews are on site, fighting the fire with water suppression and creating a hand guard.

The fire is very visible and is located 14 kilometers northeast of Kamloops. No structures are currently threated.

BCWS is asking residents to stay away from the fire, as it is potentially dangerous and people at the site can effect the service’s ability to suppress the fire.

“The BC Wildfire Service would like to remind the public that this is an active incident, for firefighter and public safety, please stay away from the area to avoid interfering with response efforts.”

The suspected cause is unknown at this point.

SPIN will continue to update this story as information becomes available. The next update is scheduled for 4 p.m. this afternoon. 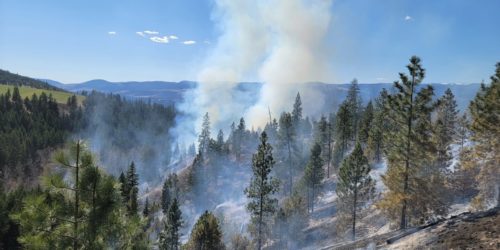 Wildfire suspected to be human caused