While fads like baking sourdough and stocking up on T.P. have come and gone since the first lockdown, one thing has been exacerbated—the demand for mountain bikes and parts
Jarrett Hofmann  | July 7, 2021
0 shares

Waking up on Christmas morning to find a shiny new bike beside the tree is a cherished childhood memory for many.

Unfortunately, for Maria Davis’s daughter, Leilani Otner, a picture of the bike had to do thanks to a delay in shipment.

Davis ordered the bike in October and hoped it would arrive in time for Easter so the family would be able to build it together, another strong candidate for a perfect holiday memory.

But after hearing a friend of hers who’d also ordered a bike from the same company was not able to get their order filled, she urged her husband to find out the status of their order.

Due to the high demand that has taken the mountain bike parts industry by storm, the bike was not on its way to her daughter, leaving her and many other people disappointed and in a mad scramble to find new or used bicycles for the upcoming season.

For Davis, Otner and many other Sun Peaks locals, mountain biking is a huge part of living in the community.

The flip side of the coin

Dustin Adams, chief executive officer of local bike parts manufacturing company We Are One, who design, build, test and sell award-winning carbon mountain bike rims from Kamloops, said there’s no sign of the demand slowing down.

“We’ve seen a really large increase in demand [since the pandemic began] from all over the world, the [United States] especially,” Adams said. “We’re up over one thousand per cent in revenue last year and before that we were up 900 per cent from 2019 to 2020.”

They have also hired over 30 employees since the pandemic began and continue to grow month over month.

Not to mention, We Are One is one of the only mountain bike part manufacturers completely vertically integrated in North America; in other words, they own their entire supply chain.

The company has helped bolster the local economy and has moved into three additional facilities since last year, all within Kamloops, to keep up with the increasing demand for mountain bike parts.

The growth in employee and manufacturing space has helped the company continue to meet their targets and keep up with the demand as best they can.

“We’re currently only eight weeks delayed on products,” explained Adams in April. “In the industry right now, it’s probably one of the better situations because we’re not waiting in line with 17 other [companies] that are manufacturing at the same facility.”

“We’re lucky enough to be manufactured here in Kamloops so even with our increases in demand, we just hire more people and manufacture more parts. It’s actually really good [that] we own our entire supply chain.”

Adams added he thinks the industry will likely see at least three or four more years of growth before there’s slowdown in demand.

“But even then maybe it won’t slow, because these people are buying lower entry level bikes right now and they’re going to be wanting to step it up into the higher end side of things. There could be a continuum based on what I currently see.”

It’s not all pretty pennies

While large increases in revenue, massive hiring campaigns and rumour of a new product all may sound like We Are One is thriving, Adams said not all parts of the supply chain are in the same boat.

“Many of the bike shops have staff on hand with no product to sell because they can’t get any parts. The demand is great if you have the product on hand to take advantage of the situation,” Adams said.

Customers have gone into the store searching for aftermarket parts they can’t get their hands on or want maintenance done on their bikes with parts the shop doesn’t have.

“It’s a bigger issue because, you know, it affects everybody. [Manufacturers] have to supply the wholesale market and the aftermarket customers. It’s kind of a sliding effect that just goes downhill from the top.”

A Canadian pioneer in bike manufacturing

We Are One has released a teaser of a new product on social media.

“We’re working on a bicycle,” Adams said. “We’re going to be launching into the all-mountain trail segment of the market. It’s the largest portion of the market based on our research.”

The bike, which has been in the works for the last two years, is unfortunately behind schedule due to difficulties which have arised partially from the effect the pandemic has had on the supply chain. In this case, We Are One is waiting for suspension and drivetrain components from an Asia-based manufacturer.

“They’re struggling to supply anything to us on time. In late August last year, I put in orders for a lot of the parts and we’re still two months delayed on a lot of it from the original delivery dates. It’s quite frustrating.”

Once the bike is released to the public though, it will be the first to be completely designed, tested and built in Canada.

“A lot of people are not aware of how difficult it is to manufacture a bicycle,” said Adams.

Typically, engineering work for a bike is done overseas, and can take up to a year just to complete computer design work. But, in as little as two years, We Are One has been able to bring all the steps of manufacturing, design, engineering, testing, mold and laminating work home to Kamloops.

“It’s hard to find skilled people that have had experience to build a bike because it’s never been done in Canada. There’s a lot of first time things that we’re doing here.”

The only thing not being done in house is the suspension and drivetrain, hence the set back from overseas manufacturers.

Fewer wheels on the ground

As for Davis, after finding out her daughter’s bike would not show up, she got straight onto the computer and telephone to try to find a suitable replacement.

“I was talking to friends in Revelstoke and other friends in Squamish who were going to start kind of putting feelers out there.”

She made posts on social media asking if anyone had a bike they would be willing to sell and called bike shops in Kamloops to no avail until a well timed call to District Bicycle Company.

“Forty five minutes before my phone call, a bike became available only because this other family had ordered it [and] decided not to buy it. It was a total fluke that this happened and so I put the money down on it and claimed it.”

Although Davis wasn’t exactly shocked by the whole situation, and knew  bikes were in high demand, she found it surprising that higher- end bikes are now flying off the shelves. 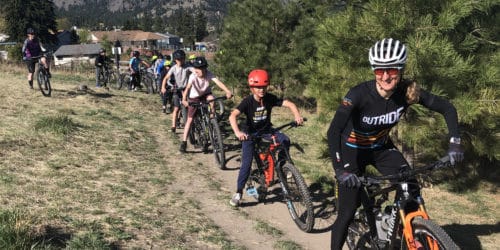 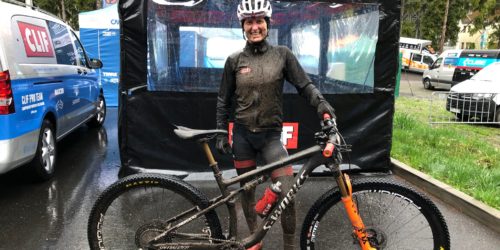