‘Downhill riding’ versus ‘downhill mountain biking’: Coasting 5 Mile road, compared to riding the fall-line through steep rough terrain with obstacles like roots, rocks, jumps and other man-made features to add to the fun.

Brake bumps n. a series of ruts created by hard braking in tight or blind corners that follow a high speed area. With each rider bouncing over them, the ruts are gouged deeper. No one likes them.

Brap (alternative spelling: ‘BRAAAP’) n. the sound of tires hitting a berm at high speed. Purportedly, a sound that makes you go faster.

Berm n. a banked turn that can be ridden faster than a flat corner (eg. Route 66).

Enduro n. type of bicycle lightweight enough to ride uphill, but with enough suspension to also ride downhill; adj. a type of riding whereby the rider habitually ignores the handy chairlift and instead uses pedal power to reach the start of the downhill trails.

‘Flowy’ versus ‘techy’: a faster, smoother ride with more speed-friendly obstacles like shaped berms and jumps (eg. Ain’t No Scrub), as opposed to a more ‘technical’ trail that is uneven or tight (eg. Cat Trax).

Freeride n. a heavier bike with full suspension; adj. a more creative riding style with an emphasis on performing stunts and tricks, rather than simply hurtling downhill fast.

Hero dirt n. as it sounds. Dirt that produces a sense of invincibility in the rider by the traction being so unbelievably good. Must be experienced to be fully appreciated.

Manual n. raising the front end of the bike to roll a trail feature with only the back tire. Essentially a wheelie with more forward momentum.

Roost n. the particularly photogenic dirt kicked up behind a rider through a corner.

‘Scrub’ versus ‘whip’: Seemingly identical moves, which involve swinging a bike sideways underneath you in the air. Both can be done off jumps, though ‘scrubbing’ helps maintain more control and speed upon landing by keeping as low as possible to the ground while performing the maneuver.

Swirly adv. riding that teases the edge of control. Riding the back brakes fast around wet, greasy or dusty dry corners can get swirly!

Tacky adj. dirt that is moist enough to enable sweet traction with your bike. The happy medium between dusty dry and saturated slick.

Taco n. what your bicycle wheel might resemble after a particularly dramatic bail. (Not to be confused with ‘potato chip’, referring to merely a massive dent in a wheel.)

Whistler Rules interj. A figurative term; n. the standards set by Whistler Mountain Bike Park that apply to the building and classification of mountain biking trails and features. Similar to winter, the difficulty levels progress through ‘green’, ‘blue’, ‘black’ and ‘double black/expert unlimited.’ 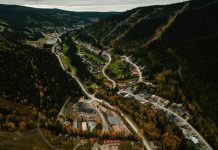 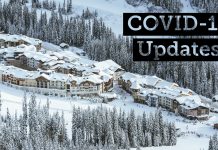