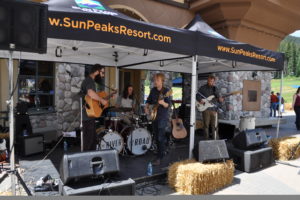 Country Fest returns to Sun Peaks from July 24 to 26, and it comes with a few tweaks to enhance the country fair atmosphere.

“Last year, there was a big focus on our headline music acts,” said Carissa Hayes, events manager for Tourism Sun Peaks. “This year, we’re increasing the focus on activities and animation around the village.”

Hayes said activities such as the West Coast Lumberjack Show and the Mountain of Beer & Chili Cook-Off — usually held as part of the Summer Kick-Off weekend — have migrated across to Country Fest.

“It’s the right crowd for these types of events,” she said.

Guests will have the chance to tour the village, stopping in at each restaurant to sample signature beers and house made chili from Sun Peaks’ top chefs, and vote on their favourites.

The returning West Coast Lumberjacks will be giving a different performance this year.

“It’ll be a bit more interactive, and it’s going to be really entertaining,” Hayes said.

A mechanical bull, a lasso station, and Sun Peaks Stable trail rides will also add to the country vibe.

Country music lovers won’t be left out either, with Rod Black headlining the weekend. The Chris Buck Band and Danielle Edge will also be there, and poet Hugh McLennan will perform a reading.

Concert goers may even get a special onstage treat. Rod Black and The Chris Buck Band are long-time friends and collaborators, and with both artists in the same location, anything could happen.

“Country Fest brings a different crowd up to Sun Peaks. It brings a great mix of ages, and it’s a really fun experience.”