You’ll be hard-pressed to find a more energetic and bubbly pair on the slopes than the Ski Sisters. In fact, Laurie White and Chase Wolfe’s zest are so contagious that by the end of our session, I was putting my ski poles on top of my helmet like antennas and cheering with them. “That’s our official Ski Sisters greeting,” Wolfe explained the first time they did it and she caught me with a confused look on my face.

The Ski Sisters are two former ski instructors who go with female skiers wanting to improve their skiing or want to have a skiing companion. Having worked as ski guides before, these ladies realized there was a niche to be filled and they decided to fill it.

“We tell the husbands, it’s better for them if we take their wives to ski with us,” said White, half-jokingly. “Because when the wives stop skiing, they go out shopping. It’s cheaper if they go out with us!”

This was my first time trying the Ski Sister experience. After spending time with the sisters on the slopes, I could see why anyone who goes out skiing with them ends up having a great time. They chat nonstop, they have a great sense of humour, and their energy is so palpable it just rubs off on you.
With this positive vibe in every session, they get women to let loose and actually ski better.

White shares their experience skiing with a mother and daughter.
“At the beginning, they were different levels of skiers. April (the daughter) was very gung-ho and Belinda (the mom) was very reserved. She was reserved coming down 5 Mile. I could see that the mother had ‘the goods’. It only took me less than half a day and I had them skiing basically equal.”
“And then the giggling started,” Wolfe chimed in.

“By the end of it, I had them going on black runs,” White said. “They did black, ungroomed and powder glades. They were in powder at a few places up to their knees and having just so much fun.”

“The biggest thing is they trusted us. They knew I wasn’t gonna get them into any trouble.”

“We noticed that if we’re not careful, we can get into people’s heads too much and then they’re thinking, thinking, thinking,” said Wolfe. “What we noticed in teaching kids and people who were having fun is you give them the idea but then you go get them trained. It will get into their legs faster than when you think about it too much.”

Overthinking is something that I’m guilty of. The Ski Sisters cured me of that. At one point, they told me to simply follow where they’re going and to relax my ankles. Only when I was close did I realize that there were mini bumps and a short drop ahead. There was no turning back, so I just took a deep breath and went for it. Same thing with the steeper terrain. And boy, was it exhilarating! With their help I conquered Exhibition, one of the steeper runs I’ve been on.

Being with them is like trying a roller coaster ride with friends that you normally wouldn’t try on your own. When it’s over, instead of being scared, you go “Let’s do that again!”

So if you see me making antennas out of my poles and giving three hoots, you’ll know why. I’ve been Ski Sistered.

If you do ski with the Sisters, ask about the $5 Ski Sisters bracelet. Proceeds go to the Discovery Centre. 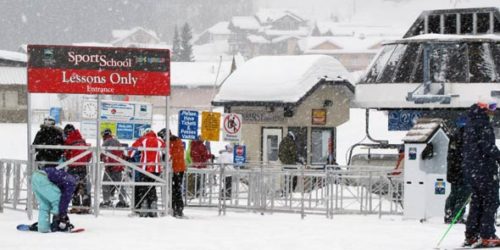