Matt Berger is poised to take part in this summer’s Tokyo Olympic Games.

The 27-year-old skater, who grew up in Kamloops, will compete in the inaugural street skateboarding event at the games.

For those unfamiliar, competing skaters are scored on timed runs of a skateboard park-style course, complete with jump, stairs and rails. The sport is great to watch for skaters and non-skaters alike.

Reached by phone, Berger said  the opportunity to compete on the world stage was the “coolest” that has come his way.

“To be able to do what I love to do on the world stage, representing the country that shaped me into who I am, is like the ultimate honour,” said Berger.

Berger’s trajectory to become an elite competitor in what is widely considered to be one of the most challenging sports on the planet is nothing short of amazing.

Over the past six years, he’s undergone two major surgeries. In 2015, after making a name for himself in marquee amateur skateboarding competitions and then Street League Skateboarding (SLS) competitions, Berger underwent a knee surgery, forcing him to miss the entire 2016 season.

Berger returned in 2017, finishing second at the Copenhagen Open and posting his best result at an SLS tour stop, placing fifth at the Pro Open. But the 2017 season was also cut short, as he required a second more comprehensive surgery on the same knee.

Berger is now back and healthy, and a strong finish at the at the Street World Championship in Rome earlier this month secured him his spot on Canada’s Olympic team.

Berger will compete at the Games alongside skaters Micky Papa and Andy Anderson.

Berger said  while he knew that he needed to finish in the top 16 to continue to be considered for a position for Team Canada, he didn’t fully grasp how heavily the Rome competition was weighed when it came to selection.

But even if he had, Berger likely wouldn’t have pursued things any differently.

“I treat [all the competitions] the same in my head,” he explained. “Whether it’s a really big event or a really small event, I want to go out and skate my best. The process remains the same.”

“It was just a matter of going out and getting used to the course, and figuring out what I wanted to do.”

There is, he conceded, still pressure when competing. But in a way, he likes it. It has a way of focussing the mind on the task at hand.

“I’ve always really enjoyed the element of pressure at contests,” said Berger, who was first sponsored at 10 years old and went onto win the 2009 Damn Am Canada competition when he was 16.

Berger’s passion for snowboarding in Sun Peaks also began early. He reckoned  he rode between 50 and 60 days a year on the mountain from Grade 7 until when he eventually left Kamloops at the age of 18 to pursue his professional skateboarding career.

So did Berger’s time in the terrain park help his prodigious skateboarding talent?

Berger said he first learned frontside three sixties in the terrain park, before ever doing them on a skateboard.

Hitting the kinked rail on his snowboard also helped him get ready to try it on a skateboard.

“I was terrified to try [kinked rails] in the streets,” said Berger. “But then once I learned how to hit them on my snowboard, I knew what I had to do.”

Berger added  a lot of his success can be attributed directly to the Kamloops Rotary Skatepark on McArthur Island Park, which was built in the mid 2000s.

The park is considered  one of the best in the country.

“The park has a lot of elements of old Slam City Jam courses, which were always the best courses,” said Berger.

Growing up, the thought that he’d compete on the world stage in the Olympic Games never really crossed his mind.

“It was never a possibility, because skateboarding was never an Olympic sport,” said Berger, adding  his goals all revolved around video parts, magazine editorials and skateboard competitions, like the X Games and Street League.

That said, skateboarding has had a meteoric rise in recent years. Berger noted  it has had an outsized influence on mainstream and become very  popular.

A few years back he wondered if it would actually make the jump to the Games.

“I remember thinking, ‘I wonder if they’re ever going to actually put this in the Olympics, because it’s getting pretty big?’” he reflected. “And then yea, they ended up seeing the value in it and doing it.”

Look out for Berger later this summer competing in Tokyo. And if you want to see him skate the streets, watch this: 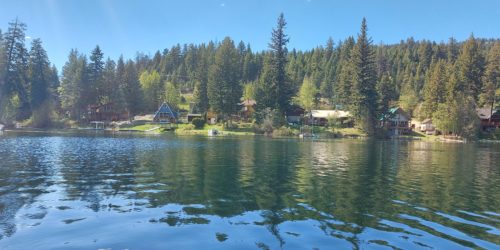