The funding is part of the second round of the Community Economic Recovery Infrastructure Program (CERIP), allocating $21.3 million for more than 50 infrastructure projects across the province.

SPMRM Mayor Al Raine said he is thankful for the grant and excited to develop the community plaza space.

“Right now there aren’t so many gathering spots,” Raine said. “There’s lots of people wandering through the village, but we do need an area where there might be some park benches if you wanted to have a picnic. If there are some entertainers around, they could perform out of there.”

As of right now the municipality only has a conceptual plan, but Raine said staff are working towards a more detailed proposal. Some of the projected developments include picnic tables, fireplaces, a water fountain and a ping pong area.

Raine said he hopes SPMRM can work with Tourism Sun Peaks to create a children’s entertainment area — reminiscent of Whistler’s Olympic Plaza — with mini houses and bridges for kids to play on. The municipality also plans on creating a water area.

“We’re not so sure what the costs are to bring the pool up to speed, but there’ll definitely be some kind of splash park area for kids,” Raine said. “We are going to be working with Little Shuswap Lake Band on the design […] The whole motif of the park will be like a Secwépemc gathering area.”

Raine said the plaza will also include a stage area based on traditional pit house designs. Pit houses were historically used by Indigenous peoples such as the Nlaka’pamux and Secwépemc. There will be a spot inside the pit house for performers, surrounded by a semi circle of benches for community members to watch.

The new plaza is planned at the current location of the tennis courts outside the Sun Peaks Centre. Raine said the municipality hopes to move the courts east of parking lot five as a separate project. He hopes they can also add pickleball courts.

Development for the plaza is slated to begin this summer.

Sun Peaks’ population more than doubled between 2016 and 2021 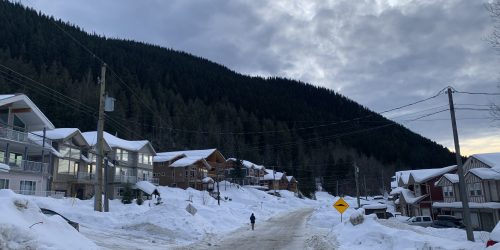