Gabriel Neron has been dominating the BC Premier downhill Jr. Sport Men (17-18) category for four  straight weeks and this past weekend was no exception, topping the podium with a time of 3:20.52.

“I’m super stoked with my time. Overall my goal this season was trying to move closer to the elite man and junior experts. Every time I go out for a race I can cut off five seconds so I’m getting closer to that,” said Neron.

He described the course at Panorama Mountain Resort as fast and technical, similar to trails at Sun Peaks and had a near perfect run.The weeks of competing caught up to him the morning of the race with fatigue testing him both physically and mentally.

“I was really tired. It was more of a mental aspect this weekend which is also good. It was a good test, but definitely stressful,” he said.

With his success this season he said he feels pressure to perform and do well at each race but was assisted by a cheering section this weekend made up of his mom and stepdad coming from Quebec to watch the race.

“I knew (they were coming out) but it still was a pretty good surprise, it was good fun,” said Neron.

Getting a much deserved break before the next stop on the series on Sept. 2 in Big White, he will spend the next few weeks practising his skills at Sun Peaks. Neron is sponsored this season by Sun Peaks Resort, Rocky Mountain, Down the Road Wellness, Meranti, and EVI. 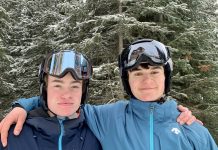