Regretting not sticking to that preseason training plan? Have no fear according to three of Sun Peaks’ health and wellness experts. There’s still time to get your body ready for the ski reason and reduce your chances of a season-ending injury.

“It’s not too late even now to start,” said Kim Grunling, physiotherapist and owner of Peak Performance Physiotherapy. “Basically when you’re looking at preseason ski conditioning you should be working on your cardiovascular, strengthening, flexibility, balance and agility exercises and then explosive co-ordination training.”

Registered massage therapist and owner of Knee Deep Sport Massage, Erik Wyatt, said it’s important to ask yourself if you can do maneuvers that you do on your skis or snowboard on dry land, things like squatting, kneeling, handstands or weight bearing on your arms.

“It’s more recognizing what they can and can’t do,” he said. “You wouldn’t go out and do a marathon the first day without running a 5 km first. So 10 laps are 25 miles, don’t go out and do 10 laps first-day. Ease into it.”

When it comes to injury prevention skier and snowboarders should be maintaining a strength training program throughout the season, not just relying on their days on the mountain according to Wyatt.  He added it’s important to maintain a fitness program like alpine conditioning or taekwondo or something different outside of your muscle memory.

“People do what they want to do, what they’re good at. Sometimes that’s not what they need,” he explained.

For Grunling, she encourages athletes to recognize that their first day out you won’t be at the same level they were at closing day last season.

“Most people tend not to be doing any of this training in off season and they think they can jump back where they were at the end of the previous season. But typically you need some time to regain your endurance and strength to get back to where you were initially,” said Grunling.

Finding the people often train improperly or overtrain a certain muscle group, Grunling suggested that skiers and snowboarders get a preseason assessment done by a physiotherapist to uncover any weaknesses or imbalances they may have.

“The stats show you’re two times as likely to injure your lower extremity than an upper extremity just in general. A third of all ski injuries, most of them are occurring at the knee joint and other common injuries for skiing are shoulders, thumb, and head if you can believe it,” said Grunling.

That’s why she recommended that when you’re strength training to focus on all the muscles that cross your knee; hamstrings, quads, and calves, as well as your core to prevent lower back and sacroiliac joint (SI) injuries.

“The recovery is just as important as the activity,” said Sonya Trevisi, registered massage therapist and owner of Down the Road Wellness.

Advocating for pre-activity warm up and stretching, Trevisi said it’s important to get your blood flowing before hitting the slopes with a few jumping jacks or running on the spot to prepare your muscles for the day ahead.

“I’m an advocate that everyone should stretch their hip flexors and quads before they go out because both snowboarding and skiing put us in some anterior pelvic tilt so telling your body ‘hey remember this position’ beforehand is quite helpful,” she explained.

She also recommended a full body post activity stretch to reduce muscle stiffness. She said it’s important to hold stretches for 30 seconds or take it one step further and hold until you feel tissue tension change.

“Ideally your only motivation would not be skiing and snowboarding, it’d be injury prevention for life,” said Trevisi.

Whether you’re already out on the mountain or just getting ready to start your season remember to start slow, hydrate, stretch, listen to your body and most importantly assess the terrain you’re riding to prevent any early season injuries. 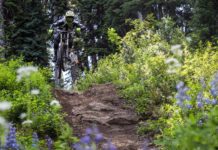