The idea of creating and selling homemade reusable bags began from the answer of “no” when sisters Ariane and Alix asked their mum if they could march alongside activist Greta Thunberg in the 2019 Vancouver climate change rally.

“They were a little bit shocked when I refused,” Quirion said. “I said ‘I’m not sure we do enough every day in our house to go walking with her, Maybe we can go later, but now, we need to be better.’”

When the girls were asked by Quirion to come up with a proposal of how the family could do better for the environment in their home, they quickly came up with the solution of creating reusable bags to replace plastic bags in their lunches.

Quirion joked her background in marketing couldn’t be further from the knowledge of sewing but decided to pursue the girl’s idea and called her mother in Quebec.

It took a motherly pep-talk and some YouTube tutorials before Quirion bought fabric and a sewing machine, creating alongside the online guides and FaceTiming with her mom in the early days of the project.

And as Quirion started sharing the reusable bags online, interest grew from co-workers, friends and the community.

“I was quite surprised by the reaction from people. They were super happy I created them, so they started to order the reusable bags,” Quirion said, who went on to create more reusable bags every night after her ski instructing shifts at Whistler.

“But I said to the girls, ‘I need a project that’s win-win. I don’t want to use this money for us,’” Quirion said.

Instead, Quirion began using the funds to support her step-son, Neron, the young downhill mountain biker that gained significant support from the Sun Peaks community during the family’s four-year residence in the village.

But while the young pro continues to train through a cancelled race season due to the spread of COVID-19, production of the sustainable bags and, recently, face masks has continued.

“When the pandemic happened, I had no plans to do face masks,” Quiron said.

That was until she received a call from her sister, a nurse in Quebec, who suggested Quirion make masks for health professionals and others to use outside of hospitals to ease the increased demand for PPE.

After designing a mask with her sister, Quirion shipped the masks to Quebec before posting about the masks on her Mother Made page mid-April, which resulted in the creation of 735 masks made by early June

Quirion said that she’s sold the reusable masks all across Canada and is proud to continue operating the win-win situation.

Neron and Quirion’s two girls have also been helping, cutting fabric to shape while Quirion continues to sew almost every day.

“I wish with Mother Made to inspire other people that have talent, knowledge or time to give their time to athletes. They have nothing except dreams. We can help them and have a positive impact and, at the same time, have an environmental impact,” Quirion said. 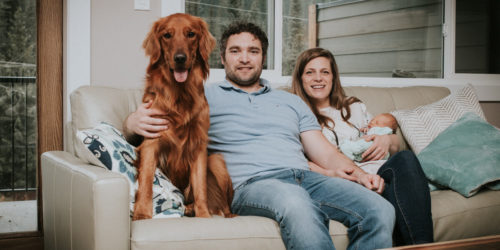