Two researchers are gathering data on skiers and snowboarders at Sun Peaks to help improve the safety of snow sports. Dr. Tracey Dickson, a tourism research associate professor from the University of Canberra, and Anne Terwiel, a tourism instructor from Thompson Rivers University, are collaborating on a study of skier behaviour.
“We’re understanding how people use the mountain—how fast they’re going, what they thought their maximum speed was, how far they travel,” explained Dickson.

Skiers’ speed, location, distance travelled and heart rate were measured using a special harness and GPS equipment that participants wore while on the slopes. Special software will analyze the data gathered from about 80 volunteer skiers selected at random to participate in the research study.
They found that most skiers or boarders don’t know their speed and have varying perceptions of the acceptable speed limit when going through a high traffic area on the slopes. People also tend to go much faster on easier runs. These factors are significant because behaviour plays a crucial role in preventing accidents.

“We find that people very consistently have no clue as to how fast they actually ski or snowboard. Most people underestimate by quite a bit what speed they think they go,” said Terwiel. “We’ve got people easily reaching 70 km/h or more on green and light blue terrains.”

“Generally injuries are infrequent in snow sports,” said Dickson. “But because at the speeds that these skiers travel on slippery surfaces, when somebody does have an accident, it can be more severe than when you just jog down the street.”

The researchers are specifically interested in fatigue, hydration and nutrition which are factors in injury prevention. These don’t only improve a person’s performance on the slopes, they also affect a person’s recovery rate.
Using the GPS’ heart rate monitor, they discovered that people may not be giving themselves enough time to recover on high speed lifts.

“What we can clearly see during the day is the pattern where the heart rate is not coming down in the time that it takes people to get on and off the lift. It looks like people average nine or 10 minutes to recover,” said Terwiel. “But when you’re on a lift that’s seven minutes and then jumping right off and skiing and back on the lift, you’re actually not giving yourself any time to recover. So if you’re skiing a great distance, say 70 kilometres, and you’re not recovering, that becomes a safety issue.”

Dickson and Terwiel will present the findings of their preliminary research at the International Society for Skiing Safety’s 2011 Congress in May at Keystone, Colo. The researchers are hoping to publish their research and to use the data as material for a more comprehensive research study in the future. 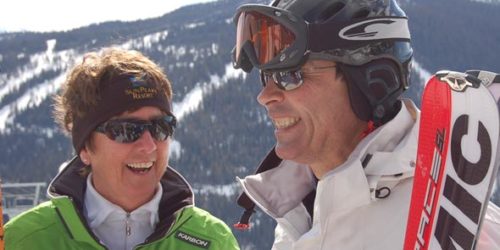 Couple to receive $90,000 for loss of property value