Growing up in a small town in India, Sudhir D’Souza learned to cook by spending long days making curries and other local foods with his family. Now an executive chef with experience in international cuisines and having worked in kitchens around the world, he cooks faster, but still relies on the skills he learned at home.

He’s now bringing his wealth of experience to the Sun Peaks Grand Hotel and Conference Centre as the executive chef.

When D’Souza was pushed out of his Fort McMurray home along with thousands of other residents last July as a wildfire ravaged the area, he visited Sun Peaks for the first time. After that, he said, the rest is history. He and his family returned to Fort McMurray at the end of the month-long evacuation to collect their belongings and moved to the resort community.

D’Souza said the mountain town’s school was a big factor in choosing the area.
“Once we came up here and we saw the school we said we’d love the lifestyle over here.”
A chef for 26 years, prior to working in Fort McMurray, D’Souza spent years working internationally opening large hotel chains. He worked to open restaurants in seven star hotels with a variety of fares including Vietnamese, Thai and Cambodian, where locals would cook their own authentic cuisine.

“I learned from watching these people,” D’Souza said. “They can cook.”
He has also worked to open a Disney cruise line ship, cooked on a private island and fed heads of state and national sports teams.

The knowledge he gained from working alongside talented international chefs shaped how he cooks now and what he envisions for the Grand’s two restaurants.
On Dec. 1 he launched a new menu in Mantle’s that he designed with items from each of the many cuisines he learned to cook.

“My menu here is a touch of all those things,” he said. “We’ve got an Indian curry, we’ve got a Vietnamese pho— it’s variations of those things.”
“We’ve got snippets of things here and there, it’s more of an international menu than just plain Canadian cuisine.”

He said he’s proud to offer foods he didn’t see offered elsewhere on the mountain and the reception has been positive. Now his focus is centered on creating a team in the kitchen that can elevate the offerings of the hotel and best use the equipment available.
“It’s a challenge. I am very trained with a lot of different master chefs but now it’s a challenge for me to train all the new people.”

After ensuring the kitchen ran smoothly through the busy holiday season, D’Souza planned to take to the slopes learning to ski for the first time— a perk to a job he loves in his new
home town.

“I don’t think there is anything else that I want to do. It’s fun, it’s pressure. There are some days where you can get really frustrated but then you see the food on the plate and say, OK, that is what we are in this business for.” 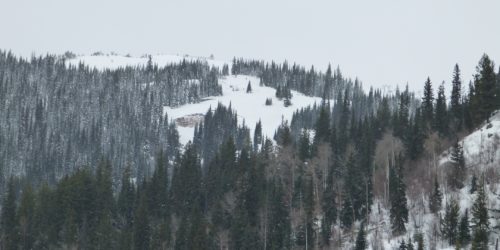 Ski guide for a weekend