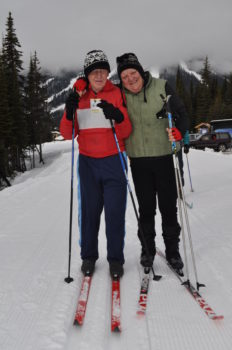 Sun Peaks played host to 55 visually impaired and blind skiers and guides for a week of skiing, training, racing and social activities as part of Ski for Light from February 9 to 15.

Ski for Light has been running in Canada for 37 years, alternating in locations between B.C. and Alberta — however it’s the first time the event has taken place in Sun Peaks. Usually the event is held at Kamloops’ Stake Lake ski area, however a calendar clash with another event left the Ski for Light organizers in need of an alternative venue before being invited to Sun Peaks by Nancy Greene.

Event organizer, Barry Nelson, said it was a great experience for the group, which included skiers from across Canada and the United States, as well as a contingent from Norway, the birthplace of Ski for Light.

Norwegian skier, Erling Stordahl, founded the first ever Ski for Light event in 1964. Stordahl had some sight as a child, but became totally blind as an adult. During an army exercise in Norway, some military vehicles passed through, leaving deep, wide tracks in the snow. Stordahl jumped into one of the tracks to try and ski in it.

“It was an experience I will never forget. I could ski without fear of colliding with anything. I felt a physical and mental relief. I felt like I had regained part of my eyesight. I felt like a part of nature. My immediate reaction was that I must share this wonderful experience with my visually impaired friends,” Stordahl said.

The concept was expanded by using two sets of ski tracks side by side so that a guide could ski with a visually impaired skier to shout commands and let the skier know what was coming up, such as hills and turns. The successful program was brought to North America by the Sons of Norway foundation in 1975.

Jan Andreasson, race director, said the guides and skiers developed a close bond during the week: “They are talking to one another the entire time they are skiing. It’s a big job and a lot of responsibility. They have full trust in you as a guide. You are their eyes.”

Nelson said participants came from a range of backgrounds — the oldest skier this year was 88, the youngest guide was 17, and one visually impaired skier was in training for the Vasaloppet, a 90 kilometre cross country ski marathon held in Sweden each March.

Find out more at the Ski For Light website.