Elon Musk has revolutionized the electric vehicle, and many now feel he’s on track to disrupt how we receive the internet, particularly in remote locations.

As you may have heard, Starlink offers satellite internet at a relatively affordable rate, and it’s already available in some parts of Canada. The technology is still in “beta phase,” meaning it is still being fine tuned and will be improved going forward.

Barriere resident David Einarson is part of the first wave in the region to install the technology, and he’s already fielding questions from people who are interested in it.

“A lot of people have expressed interest and have messaged me on Facebook asking how to get it,” he said.

Einarson said  the speed is much higher than what he received with his previous land-based connection. It now provides a connection at around 80 megabytes per second (at least when he checked earlier on in the day).

That compares to around the .9 megabytes per second that he typically got through his previous internet provider.

Einarson said that his previous connection was problematic at busy parts of the day, meaning that steaming services would end up buffering.

“Sometimes it’s fine, but you know, it’s fine in the respect that we’re not in a major city,” he said.

Starlink is able to provide quick service because its satellites are relatively close to the ground.

Einarson said that he’s excited to be an early adopter of the technology and has long been fascinated by space and space technology. He is an avid follower of SpaceX, the space exploration company that developed Starlink.

“[The service] is improving all the time. They’re still launching satellites,” he said, adding that the company planned on launching another batch of satellites shortly.

“Eventually, there are supposed to get to be like 12,000 satellites up there. Right now they have over 1,000. This system is  eventually going to provide worldwide coverage at relatively affordable prices.”

Einarson added that the system was dead easy to set up.

The kits come with everything you need to set up—a mount, the satellite, and a modem and a power connection.

Users are asked to place the satellite at the highest elevation possible to provide a clear view of the sky.

Einarson said it cost $800 for the dish and the modem and then monthly it willl cost $116, which is about $30 more than his previous provider.

The technology is restricted to one location, meaning you aren’t allowed to set up while on vacation, for example.

For Einarson, the opportunity to be on the leading edge of the technology is also a thrill.

“This is definitely the way of the future,” he said. 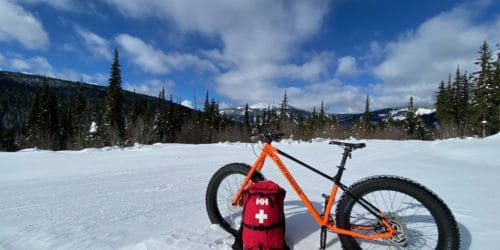