*This story was updated with the most recent information on area fires on July 3 at 1:30 p.m.

Authorities are asking the public to be prepared to leave the community if need be, having just activated The Sun Peaks Emergency Operations Centre.

The EOC was launched at Level 1 yesterday in response to the wildfire situation in the region..

The EOC is comprised of two people at this time and is “an avenue for us to collect and disseminate information in an organized fashion,” said Sun Peaks Fire Rescue (SPFR) Fire Chief Dean Schiavon, who serves as the EOC director.

Although no wildfires are currently threatening the community, with the recent extreme heat conditions and lightning events local officials are asking residents to be aware of the situation and to be prepared as conditions can change quickly.

Residents are asked to prepare emergency preparedness items in case of an evacuation, such as a grab-and-go bag. The government of B.C. lists items to organize here.

Schiavon added  the EOC can mobilize evacuations in two ways. It can perform a “tactical evacuation” for an imminent sudden threat, which would see SPFR drive the streets “blasting the sirens and horns” in order to get people out.

Kamloops Fire Rescue performed a tactical rescue last night for some residents of Juniper and Valleview after fires in the area broke out late Thursday (July 1) night, caused by two separate lightning strikes.

Alternatively, an evacuation can be conducted through a phased approach, with an evacuation alert followed by an evacuation order (depending on what situation transpired). This would be coordinated through the EOC and communicated through Sun Peaks Mountain Resort Municipality’s website and social media channels as well as the Thompson Nicola Regional District’s (TNRD) emergency alert system, Voyent Alert.

It’s a multi-purpose communication service used to send alerts to residents, businesses, and visitors during critical events like fires or floods as well as for relevant day-to-day communications such as water advisories. Register here.

There is no set-in-stone evacuation route from Sun Peaks.

“It all depends on the situation,” explained Schiavon.

“You can’t really tell [the safest route] until you know where the fire is. We do have multiple routes out of here. Some are on Forest Service roads.”

The EOC is actively tracking fourl wildfires in the region in coordination with BC Wildfire Services (BCWS). They are:

1) Gultch Creek Wildfire – BCWS #K21233: This fire is currently classified as ‘Out of Control’ and is 1.5 hectares. BCWS is fighting this fire with two Initial Attack crews, and four or five personnel supported by an air tanker and water bucket helicopter. Additional resources will be sent to this wildfire today.

2) Mt. Lolo Wildfire – BCWS #K21268: This is a small spot fire only, currently classified as ‘New.’ Resources will be allocated to this wildfire as needed.

3) Dome Hill Wildfire – BCWS #K21228: This fire is 3 km east of the North Thompson River. It is now classified as ‘Controlled.’

4) Strawberry Hill Wildfire – BCWS #K21222: This fire is location very close to the Dome Hill wildfire and is now classified as ‘Controlled.’

Several other small wildfires on the north side of the South Thompson River and the east side of the North Thomspon river are also being monitored by the EOC, however information is currently limited as resources are focused on large wildfires prompting evacuations throughout the Thompson Nicola Regional District (TNRD).

While the community is on high alert given B.C.’s recent extreme heat waves and subsequent forest fires, last night’s downpour came as a relief to many, including Schiavon.

“The fire danger rating for the day hasn’t come out yet. We dropped down to a high level yesterday. Today, I expected it to either be around the same or maybe even down to moderate with that amount of rain we had,” he said. “That rain definitely helped last night.” 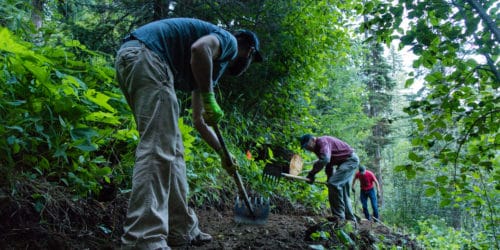