Sherisse Mousseau, the Sun Peaks School’s Indigenous education worker, said there are a total of 17 Indigenous students at the school, 14 of which are Métis.

“[The] majority of students I’m sent to work with are Métis, so I decided to get sashes for them and do a sashing ceremony,” said Mousseau.

Mousseau and Bernice Jensen, the aboriginal coordinator for school district 73, presented the attending Métis students with sashes, educated them on the history of their Métis heritage and sang a traditional welcome song.

“I talked to the kids about what the sash meant to the Métis people, where they originated from, and I told them I hope that they will use the sash in the future to show and teach others about Métis heritage,” said Mousseau.

Sashes were traditionally used as tools for a variety of purposes such as an emergency sewing kit, a tumpline to carry things on their head, and in the fur trade to tie things up.

“They never left home without it, nowadays the Métis sash is used to let other Métis people know they are Métis and to show their Métis pride,” explained Mousseau. “To receive a sash in a sash ceremony is quite an honour for Métis people and is usually used to honour Métis peoples social, political and cultural contributions to the Métis nation.”

As for the three Indigenous students who were First Nations, rather than Métis, they received medicine pouches and were taught about traditional medicines.

“That was a special gift, and I’m honoured to do that for them,” added Mousseau.

For those who want to learn more about the Indigenous history and traditional land use in the Sun Peaks area, Mousseau said to engage in self-directed studies of the Secwépemc people.

Residents and visitors of Sun Peaks can also explore an interpretive walk which points out native plants and their traditional uses next to the Gentle Giant ski run and Sun Peaks Grand Hotel.

Click here to view content, including traditional stories and knowledge, that was posted by the Tk’emlúps te Secwépemc in honour of National Indigenous Peoples Day on June 21, 2021. 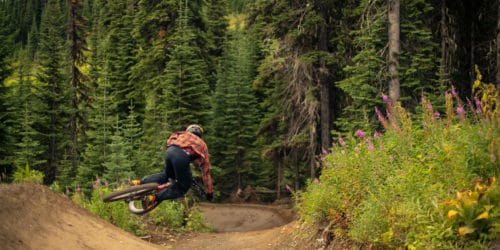