Sun Peaks patrons of the Thompson-Nicola Regional Library (TNRL) can once again borrow physical books and DVDs in a safe and distanced method through an online takeout service.

As of May 25, items that were once only available to pick up from the Kamloops Library or the TNRL Mobile Library have now been catalogued online for patrons to view and order.

Upon receiving an order, library staff will package the materials in single-use paper bags, which will be loaded on the mobile library truck and delivered to Sun Peaks every third Friday, with June 12 being the next delivery date.

“What we’ve done is we’ve set up a table outside of the Mobile Library, so patrons can come and pick up their holds,”said Melissa Lowenberg, manager of community libraries and engagement. “We quarantine all returns for 72 hours, so we want people to feel really secure about their materials.”

While the new takeout system resembles the existing Mobile Library service present in Sun Peaks, physically browsing the interior setup of the truck has been eliminated due to the health concerns surrounding COVID-19.

In addition to placing an order by calling a toll-free number or sending an email, residents can visit the TNRD Library website and place holds on materials relating to their preferences of style or genre after completing an online form.

“While we’ve made great strides in delivering digital resources including e-books, audio books and film, we know that many patrons much prefer physical items,”said chief librarian Judy Moore in a press release. “The Library Takeout program mirrors how our restaurants have transitioned to pick up during this health crisis.”

In March, the TNRD Library was given the go-ahead to install a library book drop box in the Village Day Lodge for residents to access, furthering library services in Sun Peaks.

The dropbox would operate in tangent with the Mobile Library truck, with staff emptying the dropbox every three weeks, returning materials to the Kamloops library.

The installation was ultimately delayed due to the shutdown in response to the COVID-19 pandemic but will eventually continue, according to Moore, who said the TNRD is monitoring the situation.

As for any details regarding the future construction of a library within the community of Sun Peaks, Moore couldn’t provide any further updates on the process.

While Sun Peaks mayor Al Raine couldn’t confirm a timeline or location for the project, he did float some ideas as to what it could look like as a community resource.

“Libraries, I think, are changing. Should this be more electronic? Should there be computers, so if someone was in Sun Peaks that needs access to internet, they could use the library?” Raine said. “I would love to do a community survey just to see what people see the library in terms of services required, and what do they expect from the library? 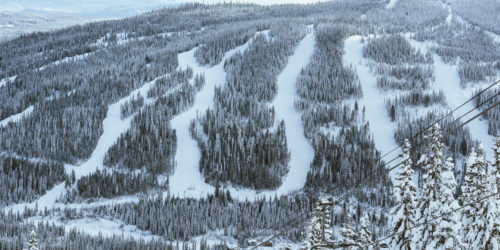