Using garbage to fuel your car

Wouldn’t it be amazing to turn the problem of continuously growing mountains of garbage into the solution for depleting oil resources? Blest Co. Ltd from Japan has found a way to convert plastics back into oil. What’s more, you can buy one that fits right on a countertop.

The Blest Desktop Be-h is a wonderful contraption that regular consumers can use to turn household plastics into oil that can be used for vehicles, stoves and even kerosene lamps.

Minoru Aoyama, sales manager for Blest, explains that the only types of plastic that can be recycled are polypropylene, polyethylene and polysterene (numbers 2 to 4). They also need to be cleaned before being placed into the Blest machine.

Drink containers, plastic packaging and even styrofoam takeout containers can be converted back into their original form—oil. Amazing!

As founder and CEO of Blest, Akinori Ito explains in a video from the United Nations University web magazine Our World 2.0 that when plastics are placed inside the machine, which looks like an oversized chemistry setup, plastics melt becoming a liquid. When the liquid boils, gas passes through a tube and enters a canister containing tap water. The water cools the gas, turning it to oil. You can burn the oil as is or further process it to make gasoline, diesel and kerosene. You’re turning garbage into essentially free fuel.

One kilogram of plastic creates about one litre of oil. Plastic triples itself in weight when it burns into carbon dioxide, and as Ito points out in the short video, “using electricity and heat, we can return it (plastic) to oil and reduce about 80 per cent of carbon dioxide emissions.”

Consider this—according to a Natural Resources Canada report Canadian Oil Market Review of 2006 & Outlook to 2020, in 2006 Canada’s crude oil demand was 1.7 million barrels per day, about half of which was satisfied by domestic production. How much of that dependency on natural resources could we cut by using all the current wasted plastic found in landfills, on beaches and even the infamous garbage island located in the Pacific Ocean?

In an Environment Canada publication, Overview of the Reported 2009 Greenhouse Gas Emissions, 522 facilities across Canada reported emitting a total of 250 megatonnes of carbon dioxide emissions. Imagine cutting that down by 80 per cent, as Ito estimates.

While the desktop-sized Blest machine is still out of reach financially for many Canadians, priced at JPY 1,100,000 or about CDN $13,350, it’s not unlikely that they could be purchased by businesses, schools or even recycling or garbage collection facilities. As with many technologies it’s likely more affordable versions will become available for consumers at some point. For now, it’s a leap in the right direction in regards to waste management.

It does seem we’re entering into an environmental crisis but with inventions such as the Blest machine, we cannot only recycle, but also reuse the waste we produce.

Watch the video from the United Nations University web magazine Our World 2.0 featuring Akinori Ito and his Blest machine.

The online video is at: www.ourworld.unu.edu/en/plastic-to-oil-fantastic. 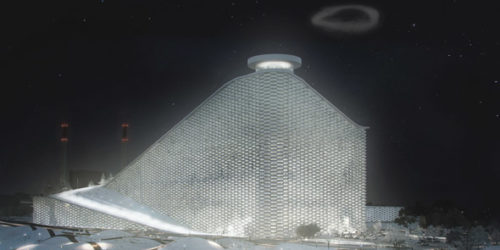