NASCAR racer Jason White continues to move up the ranks of the fastest drivers in the Canadian Tire Series, bagging sixth place at the Vortex Brake Pads 200 at the Mosport International Raceway this weekend.

This is White’s career best finish, and also the third consecutive Top 10 finish this season.

A good game plan, quick decision making on the tracks, and a powerful car all combined to give White his best race finish yet.

While the racers were able to do practice laps leading up to the race, qualifying was cancelled due to inclement weather. White was assigned a 10th place start.

When the drivers in the lead made early pit stops, White took the lead at the restart and held onto it for nine laps.

“It felt so good to be out front of this field,” he said enthusiastically.

With White securing a solid spot in the Top 10 as the race progressed, the team was able to stick to their game plan of making a pit stop after Lap 30.

Other racers started to struggle near the end. But with the fuel tank topped up and fresh tires installed in his #21 A&W Dodge Challenger, White used these opportunities to his advantage.

“I’m so privileged to drive these race cars,” said White after the race, thanking his coach and his team for their efforts. His latest finish puts him in sixth place overall in the standings. “This team is really taking big steps this year,” he added.

The next race for the NASCAR Canadian Tire Series will be July 8 and 9 at the Streets of Toronto 100. Follow Jason White at www.jasonwhiteracing.com. 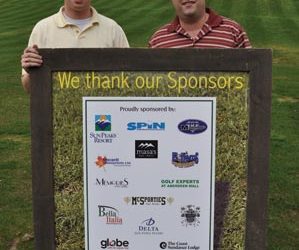 Your ball flies further in the mountains