Have you ever noticed that there are not many Level 4 female ski instructors? It’s part of a national shortage the Canadian Ski Instructors’ Alliance (CSIA) is working to change. Women In Skiing (WIS) Camps are at the forefront of their strategy and the one held in Sun Peaks each season is pivotal in this effort.

“It’s a great thing, we get a lot of feedback both from participants and new people wanting it,” said Perry Schmunk, Managing Director of CSIA. “They really appreciate being among women at the venue and the opportunity to be inspired by their peers.”

Going forward, the CSIA is looking to expand its WIS Camp network by working with the Professional Ski Instructors of America (PSIA) to host joint events.

Many women are lost to professional ski instruction when they have kids, says Schmunk. The camps are helping women to stay in the industry.

The Sun Peaks WIS Camp held in February attracted Level 4 coaches from Fernie and Calgary as well as local coach Anne Terwiel. Participants signed up for either three- or five-day camps, skiing in like-level groups of six.

“These camps are tremendous fun, and participants improve their skiing so much,” said Terwiel, who has been instructing at Sun Peaks for 29 winters. “There is something magical about bringing a group of like-minded women together, and as these camps get bigger, there is an appropriate group for everyone.”

Coaches for the five-day groups are swapped at least once during the week, and the groups come together for gate racing.

“Everyone is a little shy about the gate training day, but in the end I think it may be the day they love the most as improvement is so obvious,” Terwiel explained.

While the camps often help many participants work towards their next CSIA levels, she stressed the camps are fun for everyone. With experience coaching WIS camps at Sun Peaks, Mt. Norquay, Sunshine, Lake Louise and SilverStar, Terwiel plans to return again next season. One of her motivations is the empowerment that it brings to female skiers.

“The CSIA is working hard to bring more women into leadership positions, but there are still structural issues at play,” she explains. “In the past, our 10-member Interski team welcomed two women, and the four coaches were all male. That meant that the Canadian delegation included 13 men and two women. The next team will have a much-improved four-female delegation.”

Because of a national shortage in ski instructors, it’s difficult for those working for sports schools full-time to attend additional courses. But those who do say it is well worth the effort, including well-known Sun Peaks instructor Liz Wilkinson.

“I have done the Women’s Camp every year in Sun Peaks since arriving here for the 2018/19 season,” she said. “I have also participated in many CSIA WIS camps in Whistler.”

With the teaching component of the CSIA Level 3 already under her belt, Wilkinson is now working on skiing progression.

“My goal is to pass the Level 3 ski exam this year,” she says. “I sat it in January in Whistler and passed everything except bumps so you will regularly find me on 5th Avenue at the moment.”

The February WIS Camp was an opportunity to develop her skills as a teacher and skier in a lighthearted environment.

“I enjoy skiing with fellow female instructors,” she said. “We are normally working on different days or in different resorts and rarely get girl ski days so to have time to catch up with friends from Sun Peaks and beyond is a real highlight.”

Coached first by Lucia Horstmann from Fernie and then by Calgary’s Heather Robertson during this year’s camp, Wilkinson said the momentum built up as the week went on.

“It is a collaborative experience. Monday is working on some basics and discovering what each participant’s goals are for the season and what they want to get out of the week,” she explained. “Tuesday is development on more challenging terrain. Wednesday is race morning so everyone is together to ski some brushes, etc. Thursday is further development and Friday is consolidation of everything that we have been adding to our skiing.”

And, of course, everyone relaxes over afternoon après, she added.

McKimmon is qualified as Level 2 CADS in Autism/Cognitive Disorders, 3 and 4-track and Visually Impaired instruction and also supervises other instructors. She said anyone thinking of doing the five-day WIS Camp next year should be fit to enjoy the consecutive six-hour days.

“It is fabulous instruction in an encouraging and supportive environment,” she said. “I was able to change some very long term habits — a real breakthrough.”

With instructors adapting to group needs throughout the week and focusing on individual goals, McKimmon said she noticed similar growth in her fellow participants.

The camp is not just for working instructors. Anyone who has passed their CSIA Level 1 and maintains or renews their membership can attend the WIS camps and other Pro Days throughout the season at resorts across Canada. More information can be found on the CSIA website. 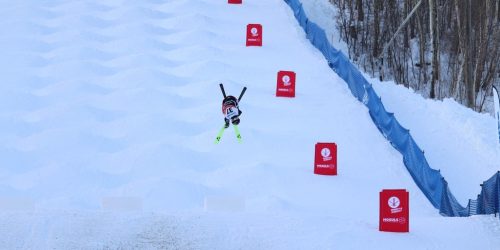