Over time there have been various shifts in how we understand the world. It was once believed that the world was flat. Physical evidence suggested that was true. Visually there was an end to the horizon and no one had apparently travelled that far and returned to tell the world differently. It now seems almost comedic to imagine such a view of the sphere we call home.

We now have a potentially world changing paradigm shift in the field of psychology and philosophy. Although there has long been reference to the concept that “As a man thinketh so he is,” we now have hard evidence that we do, in fact, live in a thought created reality.

More than 20 years ago, Sydney Banks had the stunning realization that what we experience as reality is a direct result/byproduct of what we are thinking. He saw that with every thought comes a feeling and that feeling creates our perception of the world. He observed in his own moment-to-moment experience that he was able to let a thought go and adopt a more neutral stance in the face of what were previously seen as problematic or upsetting circumstances. He saw that he and those around him had habitual responses to many of life’s events. For example, a visit from an in-law would guarantee a low mood for some. He also realized that we have within each of us an innate resiliency regardless of outside events.

For example, if we hear a strange noise in our car and think it might be something wrong with the engine, we might panic. We might imagine all manner of problems and expensive repairs and begin to worry about the outcome. When we discover it is simply a large twig caught under the car, we are instantly relieved and return to our normal good feeling.

In the past, we would have blamed the noise and the potential problems for having caused our state of mind. We might feel it is perfectly justified to become anxious and worried in such a situation. We now know, however, that our anxiety and worry are of our own making and that we actually have many other options available to us. We could become curious and investigate it ourselves or drive directly to a gas station. We could listen more carefully and recognize the true source of the sound. As our mind clears we might even remember having seen some tree trimmings at the side of the road just prior to the onset of the noise, and logic would prevail.

The potential for change that is possible with this paradigm shift is awe-inspiring. Like a pebble in a pond, the effects can ripple out from individuals to families, communities, the workplace, and further. Perhaps the traditional outside-in view of reality will someday become as illogical as a flat earth. 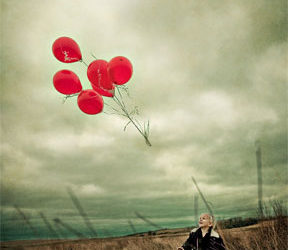 What were we thinking?

A second look at milk sharing