Overall, snow sports in Sun Peaks are remaining optimistic due to resort and community support, even with the pause of competition and events.

The Sun Peaks Freestyle Club offers coaching for both snowboarders and skiers aged six to 12 in the ‘super youth’ category and 13 to 18 in the ‘timber tour’ category. Within the club, riders improve their jump, box, rail, trick and flip skills and some athletes compete in slopestyle and big air competitions.

New this year is the club’s ‘Air Site,’ made possible by the support of Sun Peaks Resort LLP (SPR), where athletes can practise tricks and flips on jumps in a controlled environment.

“The support that SPR has given us is tremendous,” said Daniel Hoerz, club director.

With pandemic restrictions in place, competitions are on hold which is especially difficult for snowboarder Nate Brown who recently landed a spot on the provincial team.

On a positive note, the club’s athlete numbers have grown and without competitions, athletes have been able to focus on skill development without having to worry about performing in competition, said snowboard director Janna Brown.

The Sun Peaks Alpine Club offers race coaching to athletes aged six to 12 in their Nancy Greene program and to athletes in the U12, U14, U16, and for those athletes over 16 years of age, the International Federation of Skiing (FIS) categories.

“We feel very fortunate that the resort is working with us to provide some good training and we’re starting off with an excellent season. The kids are doing lots of free skiing and drill work,” said Wade Rettie, program director.

“One thing we’re grateful for is that the resort and community support us every year, this year especially. Hats off to them and all the volunteers that come and give us some time when they can,” he added.

Numbers of athletes in the older age groups are down due to injury, but younger skier numbers have increased since last year and as a whole the program is growing.

Rettie said they are finding ways to keep athletes engaged and improve their athletics, agility and ability.

“One thing we’ve noticed with the shortened training days is a high quality of skiing from the athletes,” said Rettie.

ASSP has experienced higher demand than ever, according to program manager Nicolas Riopel. However, the program is dealing with limitations this season due to a variety of factors.

“There’s no sit skiing this year, sadly, because we need to get pretty close to the student, which doesn’t make sense with physical distancing,” Riopel explained.“We’re hoping that at the end of the season we can train more instructors and have a strong season next year.”

There is also a limited capacity for instructor certification due to the Canadian Adaptive Sports’ certifying body halting the certification of new instructors and because some of ASSP’s top instructors are from Australia and unable to travel to Sun Peaks.

However, the students who are returning to ASSP are still provided with a two or three to one instructor to student ratio, which helps both the student and instructor improve, said Riopel.

He also noted positive outcomes from the new Thompson Okanagan Tourism Association (TOTA) ‘Accessible Experiences’ task force which promotes accessibility and inclusion in tourism, as well as links stakeholders and creates a positive network for ASSP.

Although instructor to student ratios have been limited to five kids per coach for all sport organizations at Sun Peaks, which limits organizational capacity, the Bluebird Day Fund was able to continue regular programs thanks to resort and community support, as well as add a program that is catered to the Kamloops Boys and Girls Club.

“We are extremely grateful to everyone who has donated and participated in order for us to continue getting kids out in the snow,” BDF told SPIN in an email.

However, typical in-person fundraising activities and events such as the Garden Jam, Banked Slalom and Super Sender Season Ender Bender will unfortunately need to be put aside this season.

The cross country skiing club at Sun Peaks is alive and well and participants who usually rent their equipment from the club daily are now able to keep their equipment for the duration of the season. This means that athletes are able to practise even more, Ivor McMahen, president of the nordic club, told SPIN in an email.

“The club’s focus is on ‘sport for life’ and physical literacy rather than competitions,” McMahen said.

The main program is for kids aged all the way from four to 16, informally known as “Jackrabbits.”

One downside this year is the club’s lack of access to the Nordic Center which is used for warming up and for post-session snacks and social time.

Despite restrictions, McMahen said the program is growing and the club is seeing many new faces in the kids’ program. 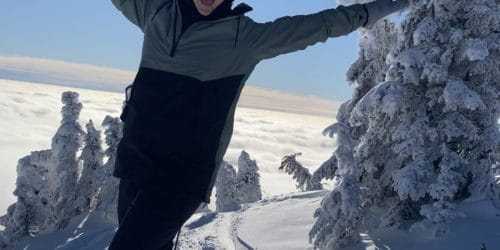 An offering of love in a time of collective grief

Non-Indigenous people — here’s what you can do, right now