With only a few days left in the ski season, it might be your last chance to spot this feathery fixture
Jenna Wheeler  | April 1, 2021
0 shares

A grouse dubbed El Diablo has been hanging around a Sun Peaks ski run, and seems to be quite content on staying there.

Gordon Gillespie and his family were skiing down Grand Return last weekend when El Diablo surprised them.

“We saw the sign at the top of the run warning that he was out there, but we didn’t really pay much attention to it,” Gillespie said. “There was no missing him; he was right on the run. We all enjoyed seeing him.”

Gillespie has skied at Sun Peaks his whole life and has never encountered El Diablo, although one of his friends claimed to see El Diablo a few years ago.

This isn’t the first El Diablo, but rather, a predecessor, according to Sun Peaks Resort LLP (SPR) ski patrol director Charles Albrow.

“For years now it’s been a joke,” Albrow said. “We’ve been referring to any of the grouse that are nesting and get a bit more aggressive as El Diablo. The original El Diablo was on Green Door. This year, one happened to nest quite close to a run and it’s coming out and pecking people… so at the top of the run we’ve got a sign warning people that it’s in the area and that it’s best to keep moving.”

Tracy Reynolds, animal care manager at the B.C. Wildlife Park, said she believes the bird is a male dusky grouse. Although nesting season will begin soon, Reynolds said he’s likely not protecting a nest yet since there is still snow on the ground.

Reynolds said it’s unusual for these birds to be aggressive, but she advised people to respect its space.

“Generally speaking for grouse, they often don’t move until the last second,” Reynolds said. “They’ll sort of use the tactic of, ‘If I don’t move they can’t see me,’ unless you get too close and then they’ll fly.”

For Gillespie and his family, that wasn’t the case.

“He came running out about 50 feet on to the run,” Gillespie said. “He’ll peck your boots and your gloves. It certainly got our attention, but it wasn’t painful at all. My son and my wife and I, we all said hi and there were a few other people who were sitting and looking… he ran over to them and gave them a peck too.”
Despite the interruption, Gillespie was happy to have come across the bird.

“It was certainly one of the highlights of our day.” 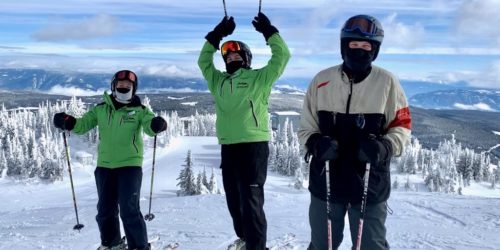