Does Oscar prefer pirouettes or programming? The red carpet will be rolled out on Feb. 27, and Hollywood’s glitterati will be out in full force to enjoy the spectacle. This year’s lineup for Best Picture has something for everyone: the summer blockbuster, the animated family flick, the rough-and-tumble western. The two frontrunners, according to the critics, are the mind-blowing psychological thriller, Black Swan, and the quiet drama about the birth of Facebook, The Social Network.

The Social Network had a great showing at the Golden Globes, including winning the Best Picture category. It’s no surprise the film has struck a chord with audiences—the story of Facebook creator Mark Zuckerberg’s rise to the top of the social networking empire is a true tale of our time. Although a few of my movie-going friends described the film as “slow”, the general consensus was the acting and writing absolutely make the film. Aaron Sorkin’s script is quick and witty, and lead Jesse Eisenberg pulls off every line with perfection. Zuckerberg is not the most loveable of characters, yet Eisenberg’s portrayal casts him in an unusually sympathetic light. Although Eisenberg isn’t a likely contender for the Best Actor trophy on Oscar night, he definitely earned his spot among the gentlemen in that category. The Social Network will be going home with its fair share of hardware at the Oscars.

The stiffest competition at the Oscars will likely come from Black Swan, Darren Aronofsky’s latest mind trip. Black Swan is thematically dense, touching on (among other things) a number of feminist issues that’ll likely ring home with many women. Natalie Portman plays Nina, a young ballerina who’s in the eye of this storm. On the brink of stardom, Nina learns that technical perfection doesn’t lead to artistic perfection. She’s torn in all directions—by her domineering mother, by the come-ons of her company’s director, and by jealousy that rages among her fellow dancers. As the film whirls towards its final, gripping climax, Portman manages to pull out every stop, delivering a performance so thrilling you won’t be able to look away. While there are a few great ladies of the screen up for Best Actress this year, if Portman doesn’t walk away with the Oscar, I’ll eat my hat!

So, who’s going to win Best Picture this year? Although my heart of hearts would love to see the statue go to Black Swan, my money’s on The Social Network. 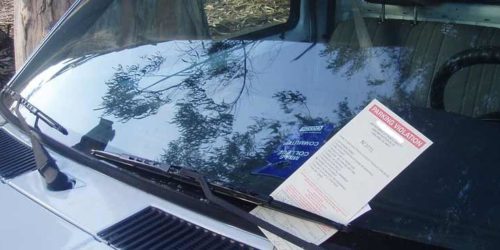 Parking on road shoulder racks up warnings for motorists