Last year Earth Hour broke records with 6,950 cities and towns in 152 countries taking part. This year, on March 23 at 8:30 p.m., records will undoubtedly be broken again as people across the globe turn out their lights to signal their concern about the future of life on earth.

Avery said that he hoped the community would turn out in force to restore Sun Peaks’ beauty.

“Our beautiful resort doesn’t show its best in April. . . .  We are now at the stage where many hands make for light work.”
Gloves and garbage bags will be supplied and there will be a free barbecue with pop for volunteers at noon in front of the Delta Sun Peaks Resort.

Bikinis for Breast Cancer takes to the slopes at Sun Peaks 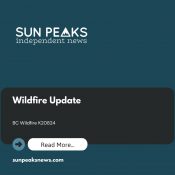