After the Embleton Mountain wildfire breached the southern firebreak set up to contain it, a group of locals mounted an epic fight to save their homes
Joel Barde  | July 20, 2021
0 shares

It was a long and scary night for a group of Heffley Louis-Creek Rd. neighbours.

Ever since the Embleton Mountain wildfire was discovered on Friday, July 9, they’ve been monitoring its progress, and watching as it’s begun to make its way down the south side of the mountain in recent days.

Yesterday, the speed of the descent accelerated—to the point the neighbours knew something was not right.

“We knew last night was going to be the night, just with how the fire came down [the mountain over the course of the day],” said Clark Hooton, who lives at 2961 Heffley Louis-Creek Rd.

At around 6:15 p.m., Hooton and two BC Wildfire Service (BCWS) firefighters inspected a recently constructed machine-made control line (better known as a firebreak) above his house to check the fire’s progress.

There, they saw that the fire had already made it to the northside of the firebreak. Hooton said the firefighters then left at around 6:30 p.m.

Hooton and other neighbours also reported the situation to BCWS officials.

As has been the case since Sunday, July 11, BCWS has had fire fighters with its structural protection unit monitoring his home at night. The unit is dedicated to protecting structures such as homes.

At around 7:45 p.m., a BCWS air tanker was deployed for the first time to the Embleton Mountain wildfire to drop fire retardant. Helicopters with water buckets have been used extensively to battle the blaze since it first broke out, and three were utilized yesterday evening.

At around 8 p.m., Hooton walked back up to the firebreak, and saw a scene that he’d feared might materialize: A pile of debris—old logs and root systems—that had been removed from the firebreak area and placed on the south side of the firebreak were ablaze.

This burn was happening around 80 or 90 metres from his home.

“Once I saw that the fire was so close, I was like, ‘Okay, that’s it. It’s going to come down. No one’s here [to fight it]….Our houses are going to be gone tonight,'” said Hooton.

Luckily, the group of neighbours were prepared to mount a resistance of their own.

Hooton jumped in his excavator—which is equipped with a large water tank and pump—and drove to the burning debris pile.

“We started spraying the fire, and we went through the water pretty quick,” said Hooton.

Two other neighbours soon turned up and “started throwing dirt on it,” aiding with the fight.

Soon enough, Hooton’s water tank ran out. Fortunately, he was ready for this scenario as well.

After 2003’s terrible wildfire season, Hooton installed a 4,000-gallon water tank on a creek that runs through his property.

He and his neighbours were able to rig together a pumping system to feed that smaller water tank at the site of the fire.

Ultimately, the group was able to run two hoses off the tank and fight the pile burn overnight.

The group fought the fire throughout the night, with Hooton not returning to his home until 5 a.m.

Hooton said he believes the group effort stopped the fire from making its way to the road and destroying homes. “Oh absolutely,” he said, when asked if this was the case. “[The fire] would have been down to the road no matter what.”

A major contingent of additional BC Wildfire Services (BCWS) firefighters were dispatched to the southern flank of the Embleton Mountain wildfire last night.

Two crews of 20-person firefighters were deployed specifically to contain the fire, with one crew staying to fight the breach overnight.

But Hooton said none of the BCWS firefighters who responded were able to make it to the pile burn behind his home, and that they were primarily focussed on an additional pile that was burning to the east of the one he was fighting (also on the southside of the firebreak).

At the request of the BCWS, the Thompson-Nicola Regional District upgraded an evacuation alert to an evacuation order for seven homes along Heffley-Louis Creek Rd. at 10:43 p.m. You can read more about this order here.

The latest estimation of the Embleton Mountain wildfire at 2:10 p.m. on July 20 pegs its size at 920 hectares, up from 604 hectares.

“It was a safety precaution,” she said. “With the fire growth and the wind that were seen in that area, it was just taking precaution for the people that lived in those houses which  were previously just on alert.”

The strategy involves building control lines—or firebreaks—around the perimeter of the fire and putting out the blaze as it approaches the breaks in a calm, controlled manner.

During the meeting, BCWS Fire Information Officer explained how firefighters had built a hand-made, narrow fire guard along the southwest corner of the blaze and were using a technique known as “blacklining” to expand it.

Blacklining is a frequently used technique where ground crews ignite fuels along the hand guard to extend the amount of non-combustible fuels ahead of the main fire.

“Crews are working down in here,” said Swift, pointing to an aerial photo of the southwest corner of the fire.”[Firefighters] are doing some hand ignitions to help bring the fire all the way to the fire’s edge.”

In an interview this morning, Street clarified that no hand ignitions had in fact taken place yesterday.

“Crews actually didn’t do any hand ignitions yesterday,” she said.

“They were planning on it, but on site conditions weren’t favorable throughout the day. So no hand ignitions actually did occur.”

“We didn’t do any aerial ignitions or anything,” she said. “This was just normal fire behavior; when the winds picked up in the evening, that pushed it.”

Yesterday’s uptick in action on the Embleton Mountain blaze comes as British Columbia sees wildfires burning in many parts of the province, with challenging weather set to exacerbate the situation.

The extended weather forecast calls for continued hot and dry conditions, with heightened wind activity in the Interior and southeastern B.C.

After days of pressure, on Tuesday the B.C. government declared a provincial state of emergency. The state of emergency is initially in effect for 14 days once issued and may be extended or rescinded as necessary.

According to a provincial release, the state of emergency applies to the whole province and “ensures federal, provincial and local resources can be delivered in a coordinated response to protect the public, which remains the provincial government’s top priority.”

Since the Embleton Mountain wildfire broke out, Hooton and his neighbours have been monitoring the fire closely, often gathering at a field where they can easily see its progress.

They’ve jokingly referred to themselves as the “Stoneyview Fire Brigade,” in honour of his neighbours’ ranch.

Hooton said this shared experience has drawn the group much closer. (They are also previously bonded by the fact  they don’t get high speed Internet service at their homes—something they previously fought for together.)

“We would watch the fire during the day, and then go and have dinner together and kind of figure out the plan each evening.”

Hooton said he’s been very appreciative of the efforts by all firefighters involved in battling the Embleton Mountain wildfire, but it was necessary for the neighbours to step up to the plate, given the severe strain on resources this year’s busy and early wildfire season has placed the BCWS.

“It was a good group of guys,” said Hooton of the group he fought the fire alongside early in the evening.

“It was very obvious that resources are so limited and that once dark came, there was no one here, other than looking at the water tanks on the road and making sure they’re full and checking the hoses and stuff,” he said.

“They just don’t have the people.”

Asked about last night’s events, Swift of BCWS sent the following by email:

“All 60-personnel worked late into the night, 20 of which remained on-site through the entire night. The same 20-personnel are back on-site and will continue work into the morning.” 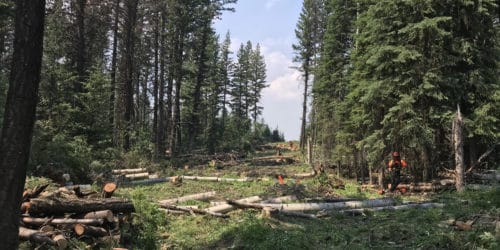 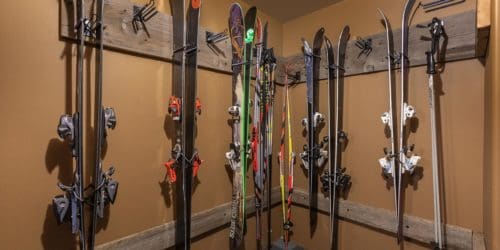