To most people, carving a pair of skis and carving out furniture from recycled wood doesn’t share many similarities but luckily for his customers, Mitch Upton isn’t like most people
Jarrett Hofmann  | July 21, 2021
0 shares

As a teenager, Mitch Upton’s summers were spent clearing trails on Tod Mountain in exchange for a winter season pass where he’d patiently learn how to properly maneuver his 215 centimetre length planks.

Nowadays, on modern skis, most people couldn’t fathom what it would’ve been like to dodge towering timbers while executing perfect turns down infamous runs like Freddy’s Nightmare, especially before it was gladed into the still tightly packed double-black diamond slope that runs looker’s right off of the Burfield chairlift’s mid station.

But back in the days before Sun Peaks was incorporated and families frequented the Mt. Tod ski hill, Upton learned from the best and was up for the test.

“I remember skiing with a fellow, a really good skier named Craig Ellis,” recalled Upton. “We got off at mid and dropped into Freddy’s Nightmare. There was no name for that run [at the time] but it was super tight. All I could hear [was] Craig swishing through the powder down below and skiing through the trees really quickly and beautifully.”

Upton continued down far behind Ellis, linking a couple of turns here and there before narrowly missing one tree after another and having to divert from the fall line to gather himself.

“We got to the bottom and I said to Craig ‘how the hell do you do that?’ He never really did say too much but I remember he looked at me and said ‘Shoot for the white spots,’ then skied away,” Upton said.

With many years of patient practice, Upton finally figured out just how to “shoot for the white spots,” after he tagged his coat on a branch while skiing a run that he didn’t even realize had trees on it.

“I stopped after realizing what happened to my jacket and thought I don’t remember seeing one tree while coming down that slope but it was full of trees, then it came to me; that’s what Craig was talking about, focus on the white stuff.”

Upton didn’t know it at the time, but trees and patience (and of course more skiing) would be a central theme throughout the rest of his life.

Upton grew up in Kamloops, met his wife Tracy, raised two daughters, trained 12 sled dogs and worked in the forestry industry for 20 years as a tree planter, forman and millworker.

He eventually bought a plot of land in Lac Le Jeune with his wife and built a post-and-beam style home with wood that he reclaimed from the old Pine St. bridge in Chase after landing a contract to deconstruct the bridge 30 years ago.

The home building project, which he completed with no previous construction experience and learned on the fly with the help of a DIY book, kicked off his career making wood finishing products such as flooring and trims, as well as custom wood furniture which are all uniquely created with recycled materials.

The project combined his patience he gathered while learning to ski with sheer determination acquired from years of planting trees throughout B.C.

“It was all self taught. I wouldn’t call myself a master finishing carpenter but the creative side I think must be inside,” Upton explained.

Large planked rustic floors were a centrefold of his business, and can be found in the Sun Peaks’ Bridgegate development in the east village, as his craftsmanship was an option for those homeowners who wanted to upgrade their floors to 12 inch wide reclaimed Douglas Fir planks.

“One of the units I did was for a couple from Seattle and we became really good friends. I would get invited for the guys’ weekends up there, and during COVID, since they couldn’t travel, Tracy and I would stay up there over the weekends last season.”

Upton has continued to provide all kinds of custom furniture for homes in Sun Peaks, including custom ski racks, benches and furniture.

“Sun Peaks has been a pretty good market for me. It’s nice too when you get to deliver a piece or go instal something when it’s also a powder day and you can get out and get two hours done on the slopes then go to work,” Upton added.

He said now he prefers building his custom furniture for people who give him the creative freedom to make the pieces unique, and enjoys working with reclaimed wood now more than ever.

“We’re fighting for these big trees these days and we should be. Getting your hands on a timber that would have been cut sometimes 100 to 150 years ago, it’s cool to get your hands on that and it’s a part of the west coast’s history,” Upton explained.

During his days in the tree planting business he always wanted to see less waste out on the cut blocks.. There were blown trees that were not harvested due to resistance by the lumber companies because of the amount of work it would take to gather them all.

“The reclaimed wood was sort of an outlet that way because seeing the trees on the ground you know you could do something with was something that made a lot of sense.”

Although Upton has worked, lived, and skied all over B.C. and sold many of his products across the Pacific Northwest and even as far and wide as Ontario, Florida, New York and Hawaii to name a few, Sun Peaks is where his heart is.

“Skiing here as a younger person and growing up around it, learning to ski, like really ski, and the camaraderie and the people make this place special, it’s a rarity to have a place like this nowadays,” remembered Upton.

Over the winter you can find Upton all over the mountain, but he said the laundry chutes of Morrisey and the Burfield side of the resort are some of his favourite spots on days where he can implement his 10 centimetre rule.

Upton can also be found at artisan summer markets or christmas fairs where he’d love to exchange ski stories or tell you which region of the province has the best reclaimed wood for your homes next addition.
Find out more about Mitch on his website at www.oldtimbercompany.com or view his products at www.solidwoodpro.com. 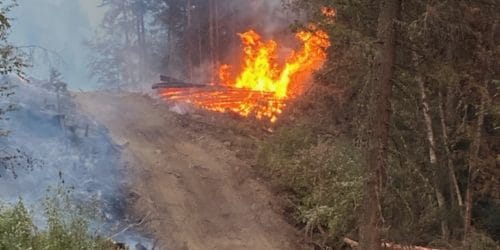 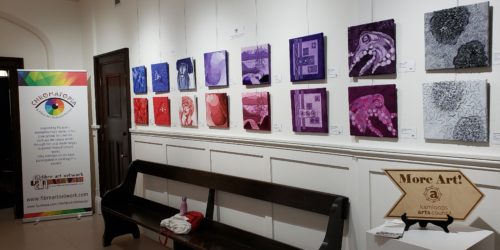