Today I did a lesson with George Terwiel. I have spoken to George on numerous occasions, usually over the phone for an interview. I’ve also seen him in passing at Treeline Studios, one of the stores he owns in the village. Today was one of those rare times when we talked about something unrelated to a story I’m writing. For me, it was pretty cool to get to know one of the locals in a more laidback setting. And he’s got some exciting news to share.

“Anne was on CBC’s Daybreak this morning,” he said.

Anne is George’s wife and a TRU instructor. She’s doing research with the University of Canberra on whether people who volunteered during the Olympics were inspired to do more volunteer work—catching the “volunteer bug” as CBC put it.

In addition, I also heard that the entire family got to ski together recently, as their daughter Elli, a member of the national alpine ski team, is back home for a few weeks before going back to Europe to continue competing—a hectic itinerary that includes a World Cup race (her second this season). George said she’s really looking forward to it.

I can’t imagine how lucky Elli is, travelling all over in her prime and competing with the world’s best while doing the thing she loves. The rest of us could only wonder what that feels like.

But enough daydreaming. Today was a day for skiing and improvement. We started off with a warm up on 5 Mile, then a training run on Suncatcher and Sundowner. Just like last week, the focus was on separation of the upper and lower body. The more I learned to keep my upper body quiet and the lower body active, the easier and more enjoyable it felt to ski even the steeper terrain. Gone were the worries of sliding and falling. In their place were confidence, better control and exhilaration. The entire time, I kept thinking “This is awesome!”

After the Sun runs was the Crystals. We rode the Crystal Chair to go on the Crystal Run. Weather can change very quickly as many skiers know, so sun changed to fog as we skied down to Crystal Run. Fortunately, visibility improved once we reached the run. And because it had been snowing the entire time, we had a good layer of soft snow underneath our skis.

George gave some pointers on steering and allowed me plenty of time to practice. In addition to keeping a good stance and a quiet upper body, it was important to know how to steer properly. On steep terrain, he said it’s important to finish the turns to keep the speed consistent. I also learned to let go at the beginning of the turn and to really put some weight on the downhill ski while waiting for the next turn. The tendency for beginner skiers is to let the lower body go idle, but to progress, I needed to keep my legs active. George also showed me how to carve, something I got to try on the flatter slopes.

With all the tips given out, it was time again to gain some mileage. To wrap up the lesson, we went down 5 Mile and did a mini detour through The Other Way before returning on 5 Mile.

“Bye Lailani. I’m sure I’ll see you around,” said George as he skied off to his next lesson. Waving back, I thought it’s great that, in addition to a fun, informative lesson, I got the chance to know a fellow local. 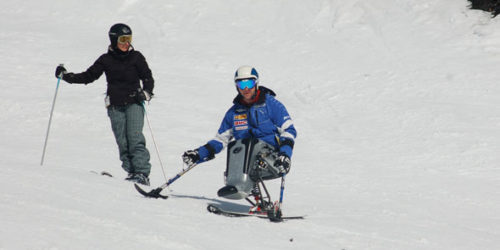