Few things are more delightful than seeing a butterfly in the high alpine.

A group of Western Canadian scientists is hoping to capitalize on that by asking hikers to snap a photo when they see one. The research will be utilized to better understand the butterflies.

“These records are just huge for us,” explained Zachary MacDonald, a doctoral student in applied conservation ecology at the University of Alberta.

The scientists are encouraging “‘citizen-science observations” of alpine butterflies using easy-to-use digital repositories, such as iNaturalist (www.inaturalist.org) or eButterfly (www.ebutterfly.org).

MacDonald is one of three authors of a new article in the Alpine Club of Canada’s latest State of the Mountains Report. Felix Sperling, a professor of biology at the University of Alberta, and registered professional forester William Sperling, also contributed to the piece.

MacDonald said in the Thompson Okanagan, the species of high-alpine butterfly that is most common is the Rocky Mountain parnassian. These butterflies are primarily white with black spots on their body, which allows them to keep warm in cold temperatures.

Parnassians also have red spots on their hind wings and furry bodies. According to MacDonald the furry bodies help insulate them in cold weather.

According to MacDonald, the flight style of the parnassian is mesmerizing and truly something to behold in person.

“They’re the only butterflies I’ve seen that can kind of parachute off of cliffs,” he said. “So sometimes you see them flying around and they do this really weird thing where they open up their wings and they just drop off the cliff.”

What follows, he explained, is a “controlled descent” where the butterflies are essentially parachuting to the ground rather than flapping their wings.

MacDonald added parnassians are also well adapted to high altitudes and are able to fly in relatively cold temperatures.

They added now is the time to double down on monitoring them given the challenges they face.

MacDonald said that climate change will result in significant variations in weather patterns. This is significant for the parnassians, which rely on a “relatively deep” snowpack to insulate their eggs during cold weather.

For MacDonald, the joy of seeing parnassians high in the alpine never fades. His enthusiasm for the butterflies is infectious.

“It’s really interesting because they’re part of the swallowtail family, which are the really large yellow species that you see flying around town and stuff, the ones that are almost bird sized,” he said.

You can read more about alpine Butterfly in the 2020 State of the Mountains Report here. 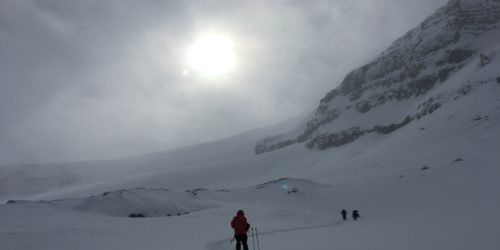