Whether it’s overcoming limited space, tackling natural disasters or embracing culinary trends, the owners of Vertical Café share a solution-seeking mindset. In the words of co-owner Tania O’Toole, it’s “The little café that could.”

The café, nestled among other businesses near the village core, has seen quite the year. Despite hardship, Tania says creativity and timely partnerships have helped the family-owned eatery thrive.

Wildfires in August of 2021 effectively halted peak summer trade, but an anonymous donation from a local sparked a breakfast project for the B.C. wildfire crew.

“The sponsor wanted to donate $750 per day for a whole week,” Tania’s husband and business partner Rob recounted. “I said yes, I think I can make that happen.”

Having consulted with the fire chief and another supervisor, Tania and Rob prepped breakfast for 40 workers the first day. Although BC Wildfire Service rules made further donations impossible, Vertical Café managed to keep feeding crews.

“They ended up offering us a contract — we did breakfast, 5Forty Café & Cantina did lunch, and Masa’s did dinner for a little over two weeks,” said Rob. “We averaged around 50 people per morning, the whole time doing this all from scratch.”

Floods, landslides and road closures in November led to more hurdles but the optimistic O’Tooles managed to find a silver lining. “We were trying to keep that positive outlook, keep everyone’s spirits up in the community,” recalled Tania.

Although shipping interruptions caused by the adverse weather created culinary challenges, Sun Peaks’ businesses stepped up and collaborated to keep the community fed.

Ohana Market & Deli managed to get a lot of local produce but they ran out of large paper bags, Rob explained. When he saw this on Facebook, he dropped off an extra case of bags.

“Then all of a sudden we couldn’t get whole wheat wraps, so I posted that on the food and beverage community Facebook page,” he continued. “Marty from 5Forty had some surplus.”

“We might be competitors but we’re all part of the same community and what benefits one, benefits all.”

Even throughout the pandemic, the O’Toole positivity has prevailed. In keeping with varying COVID protocols, creative adaptations have included contactless online ordering, a takeaway window and plexi-glass partitions. Re-igniting his membership with the BC Restaurant and Foodservices Association (BCRFA) gave Rob access to webinars, government resources and networking.

“In some of the early meetings, it was clear … that the buying public would want to know more where their food was coming from,” Tania explained.

B.C. suppliers include The Very Good Butchers, Blackwell Dairy, Cherry Hill Coffee, Craig’s Bakery and Honeyberry Farm Market. The ‘Jones Garden’ — a collaboration with friends Helen and Mark Jones in Whitecroft — also meant the O’Tooles could grow their own ingredients.

“We plant lettuces, swiss chard, kale, arugula, peas, radishes there, all of which can be blended into our salad mix,” said Tania, who grew up on a farm in Manitoba. “It is even more sustainable if a café can be involved in growing, picking and serving their own ingredients.”

All of these innovative ideas emanate from family collaboration, the couple explained, with 19-year-old daughter Darby embracing the latest trends in gluten-free and plant-based eating and 16-year-old Liam acting as chief tester and occasional extra hand.

Darby, who works part-time at the café while studying online for a biology degree with TRU, also has a knack for décor, notably creating the café’s signature multi-coloured window mural.

Soon to be officially launched is the Vertical Café’s new webstore, which will sell branded water bottles, re-usable coffee cups from Keep Cup, and a unique range of apparel including beanies, hoodies and t-shirts.

“The café just screams tie dye and I love wearing it, so I looked locally and found BC-based Wildflower Dyes who are creating a colour mix just for us,” Tania said. The gear will also sport an edgy emblem designed by local artist Zuzy Rocka.

Another one of this year’s ongoing projects is an extension to Vertical Café’s patio garden, which will double the venue’s to 40 this summer. With only 475 square feet indoors, Tania and Rob focused on expanding outdoor seating and adding heating when COVID first hit.

“Our heaters are infrared, radiant style,” Rob explained. “Infrared might cost more initially but it is lower maintenance. People love to be outdoors in ski resorts and having those heaters provides the warm ambiance.”

In the future, the O’Tooles envisage Sun Peaks becoming a ‘foodie destination,’ and look forward to being a part of it. 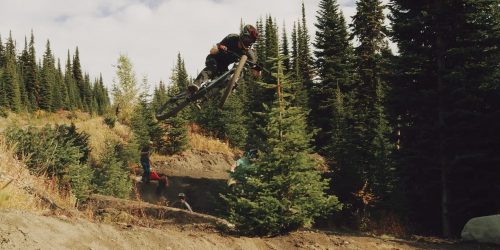 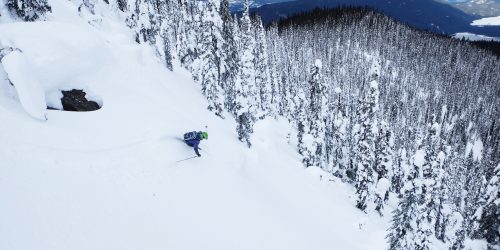