Iain Stewart-Patterson is no stranger to the mountains or researching risk mitigation factors within them. He’s a teaching professor at Thompson Rivers University (TRU) in the adventure studies program, an International Federation of Mountain Guides Association (IFMGA) certified mountain guide and conducted research on the role of intuition in Canadian ski guide decision making for his PhD thesis.

Stewart-Patterson, also an avid sledder, recognized a research gap surrounding sled’s impacts in avalanche terrain that could be connected to avalanche fatalities among sledders.

“In 2012 I started teaching Canadian Avalanche Association (CAA) level one courses to sledders,” he explained. “Scott Thumlert published his thesis on stress measurements [by sleds onto the snowpack] in 2014 which I presented to my class. The responses from the class were ‘ya…but there’s more.’ I also recognized there were very few people conducting research on snowmobile specific problems, [then] I found Jeremy Hanke’s research.

Hanke, a sponsored professional sledder and CAA level two instructor, has also run many successful avalanche skills training (AST) courses tailored to the sledding community and was one of the first to engage in sledder research.

In 2016, Hanke and Stewart-Patterson teamed up and presented a paper at the International Snow Science Workshop (ISSW) where they attempted to identify patterns from all sledder avalanche fatalities in Canada from 1973 to 2016.

“Some of the interesting things that came out of that paper were a high number of fatalities that were the result of triggering a deep persistent weak layer,” Stewart-Patterson said.

The fatal weak layers were typically found to be over a metre deep in the snowpack, deeper than what an average skier might be able to trigger.

The pair got to work to find out how deep and when sleds affect deep persistent layers in the snowpack.

Another set of questions led Stewart-Patterson and Hanke to wonder if the problem was also to do with the delivery and reception of AST courses to sledders.

Some of their questions focused around the AST curriculum. What part of the curriculum could be the issue? Was it the skier-focused content? Was it delivery methods? Did the problem lie in the instructors who are mainly skiers or the sledders who are students?

“We looked at the characteristics of each of those groups [sledders and skiers] and what we found was skiers were people used to sitting in lectures for hours and getting the content because of their [traditional] academic background. We then looked at the sled community and the majority of them are highly trained and successful in the trades, but the learning process was different,” explained Stewart-Patterson.

“So I met with Dr. Lindsay Langill, the dean of Trades and Technology at TRU, who’d done his PhD on how to deliver trades training in an adult population and he said that sitting in a classroom for 12 hours doesn’t work well [for them]. It’s more about short, intense, hands on and direct feedback.”

It became clear to Hanke and Stewart-Patterson that the classic AST delivery model was not fitting the learning needs of a typical snowmobiler, which led to another presentation at the 2016 ISSW and a set of suggestions submitted to Avalanche Canada, who manage the AST curriculum.

With part of the sledder fatality issue answered, the pair focused their attention on what Stewart-Patterson called “the main event,” which is aimed at measuring the force sleds put on the deep and dangerous layers of the snowpack during specific maneuvers.

More recently, research has taken place in the field with a sensor array they acquired from Thumlert’s previous research. The sensor measures the pressure bulb of a sled and the pair applied it to common dynamic sledding maneuvers.

“When we analyzed it, we thought about the movements sledders make when they’re really getting after it. So we measured a range of different sledding maneuvers and measured how deep the spinning track of the sled was running into the snowpack.”

The two sled maneuvers identified that deeply affect the snowpack and may be more likely to trigger deep, persistent, weak layers were found to be the uphill climb at full-throttle and the downhill carve, where most of the sled’s force is concentrated on the inside ski during a carve.

“[The questing we’re asking is] what is the force 20, 30, 40 centimetres down below the track? And that’s coming up at 10 times the load of a skier. Now, we’ve expanded that even further,” Stewart-Patterson said.

The next step in their research is to connect the results of different snow stability tests to the triggering of adjacent slopes by sleds, similar to what has been done in skier avalanche skills training with the compression test, a test used by backcountry travellers where they isolate a column of snow and use a shovel to tap on it to test the strength of layers in the snow.

“The compression test has been really well studied by Bruce Jameson in terms of [results] correlated with skier’s triggering adjacent slopes. Those previous studies are why we’ve looked at compression tests for sledders,” said Stewart-Patterson.

Considering the weight of sleds and the deep track penetration into the snowpack, Stewart-Patterson and Hanke are researching the relevance of modified extended column tests, where they measure the track penetration depth of the sled, remove that amount of snow from the isolated column they are testing. They then use their shovels to test the strength of deep layers in the snowpack that sledders have been likely to trigger and then they want to correlate those to adjacent slope triggering.

Unfortunately though, much of the research has been paused due to COVID-19 and a lack of funding available, said Stewart-Patterson. 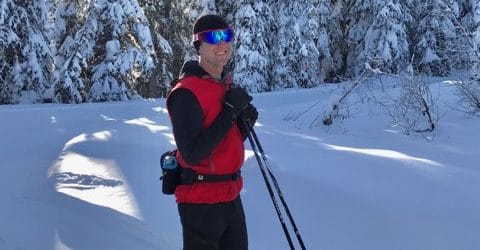 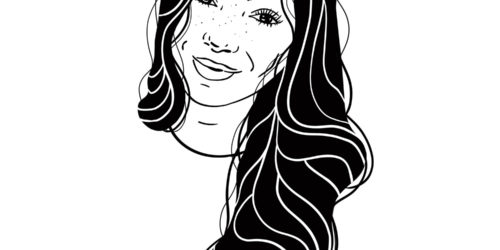