Two Sun Peaks Fire Rescue (SPFR) volunteers were recently hired for full-time positions on the team. Campbell Bryk has taken on the role of training officer, while James Griffiths has been hired as the fire prevention officer.

SPIN spoke with Bryk and Griffiths to hear more about their involvement in the community and what led them to these positions.

Originally from downtown Toronto, Bryk has lived in Sun Peaks for almost eight years. Although he has worked several different jobs in the community, Bryk said he knew becoming a full-time officer with SPFR was the next step for him after four years of volunteering.

“This was the job that I was waiting for,” Bryk said. “The more community involvement I got and the more firefighting experience I got, the more I wanted this to be my job.”

Bryk is also involved in the community in many other ways. For the past six winters, he has worked full-time running his ice fishing business, Elevated Fishing Adventures. Although now committed to SPFR, Bryk still intends to run ice fishing next winter on his days off.

Throughout the years Bryk has also worked in dogsledding, canoe tours, segway tours, landscaping and on the resort slopes crew. He is currently the director of trail building for Sun Peaks Recreational Trail Association (SPRTA) to help facilitate trail building sessions.

“I always say that I do the things that I really love to do,” Bryk said. “I’m a long-haired ice fishing guide in a ski resort. That’s a real job. And now I get to be a training officer at a fire department in the community that I want to be in.”

Although this is his first office job, Bryk said he’s excited for the mix of tasks he’ll be pursuing in the role.

Griffiths first moved to Sun Peaks from the United Kingdom with his family almost four years ago. He said they found Sun Peaks on a map and it worked well for the outdoor lifestyle they wanted, so it’s where they ended up.

Griffiths began volunteering with SPFR three years ago to get more involved in the community and meet new people. Having worked as a technician for 18 years, he didn’t expect firefighting to eventually become a full-time position.

“It was just one of those things that evolved,” Griffiths said. “This opportunity came up and it was a good time for me to make a change in my career, so I went for it.”

As fire prevention officer, his main responsibilities include fire inspections and investigations. Griffiths said his previous experience as a technician is beneficial for this role because he’s familiar with inspections and working with building codes.

Griffiths will also play a big part in rolling out the FireSmart program this spring.

“Getting [FireSmart] more into the community after the Embleton fire last year is going to be a pretty big thing for us. And working with the community for other events as well,” he said. “We just want to get the community more involved with the fire hall and what we do.”

In his free time, Griffiths enjoys the outdoors through snowboarding and splitboarding in the winter, as well as hiking and paddling on the lakes in the summer.

“The outdoors — that’s why we came to Canada,” Griffiths said. “We spent every holiday going into the mountains, so we decided to move to them.” 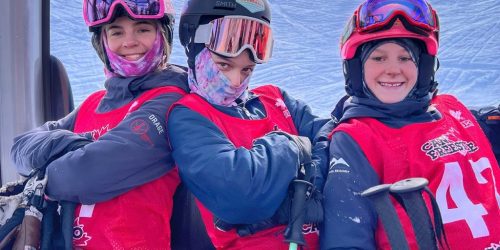