Sun Peaks residents were able to connect with their mayor and fire chief during an hour-long meeting organized by the Sun Peaks Mountain Resort Municipality (SPMRM) Emergency Operations Centre (EOC) on Wednesday, July 14.

SPMRM Mayor Al Raine opened up the meeting by assuring residents that they aren’t in immediate danger from the Embleton Mountain wildfire.

Raine urged the public to keep as calm as possible given the challenging circumstances facing the community.

Raine added that he suspects the municipality will continue to be under an evacuation alert as long as there continues to be fire on the western side of the Whitecroft Valley.

“As of this morning, in about five or six hotspot locations, fire was moving lower down the mountain, and it is getting near the fire breaks and the valley floor,” said Raine.

Rain added that the forecast for the next two weeks is “not helpful,” with “no rain in sight in the 14-day forecast.”

SPMRM has been subject to an evacuation alert since July 11, after a fire broke out on Embleton Mountain last Friday. The Embleton Mountain wildfire is taking place approximately seven kilometres west of Sun Peaks.

You can read more about the evacuation alert of Sun Peaks (and what you should have ready) here.

This Embleton Mountain wildfire has grown substantially in the intervening days and was estimated to be 516 hectares in size on Wednesday afternoon by the BC Wildfire Service (BCWS). You can read more about the fire and the specific measures firefighters are taking to stop it here.

In his remarks, Raine said Sun Peaks is largely on alert due to the limited evacuation routes in and out of the community. Authorities are concerned that the main artery to Sun Peaks—the highway from Heffley Creek—may be impeded by the wildfire, or that it may have to be used as a staging ground to fight the wildfire, which is still showing aggressive behaviour.

Residents should therefore be prepared to leave either on the highway or through the McGillivray Lake Forest Service Road (FSR), a dirt road that leads to East Shuswap Rd. outside of Chase, B.C.

To get to the McGillivray Lake FSR from the three way stop sign at the top of Creekside way, head towards the east village and turn left onto Sun Peaks Rd. and continue straight to the top of Sun Peaks Rd. where there is a cul-de-sac with Bella Vista Dr. on the left. The FSR starts on the right hand side of this cul-de-sac.

The dirt road is 34 kilometres to Chase, B.C. and comes out on East Shuswap Rd. near Neskonlith lake.

The road is marked with white signs and orange writing stating “EVACUATION ROUTE” with an arrow in the direction of travel away from Sun Peaks. There is a fork on the FSR with a white sign on the right hand side posted to a tree that says “Highway 1”, here; take the lower road (on the right hand side when travelling away from Sun Peaks) to continue towards Chase on the McGillivray FSR.

One can also use GoogleMaps to find the route.

Authorities are concerned that dust may be an issue on the McGillivray Lake FSR, so the public is encouraged to drive slowly and leave plenty of room in front of their vehicle.

Both Raine and Schiavon assured the public the road is suitable for most two-wheel drive vehicles and is in good shape.

Schiavon asked the public to be calm if an evacuation order is ultimately ordered.

“One of the worst things that could happen is an accident or a breakdown that impedes the evacuation process,” said Schiavon. “The route for the evacuation will be in the order, and [Sun Peaks] Fire Rescue, RCMP and other personnel will be in the village helping to notify people and direct people where to go.”

SPMRM has also arranged for shuttle buses to pick up those who might not have transportation of their own or easy access to it.

In the event that the community is evacuated, a private security force will be hired to keep an eye on things and prevent theft.

Shiavon added that one of the best things that people can do right now is to ensure that there is a 1.5 metre combustible-free zone around their homes, and their homes are FireSmart, meaning they adhere to certain guidelines that will make them safer from wildfire.

A full list of BC FireSmart guidelines can be found here.

SPFR has been focused on the Whitecroft since it first broke out and the team of volunteer firefighters has been working around the clock to protect people’s homes.

Shiavon said he’s been very impressed with the team, saying their work has even won applause from the BCWS structural protection squad working on the fire.

Both Raine and Shiavon also expressed concern for the safety of all firefighters working on the blaze alongside the highway and asked that people keep their eyes on the road when driving through Whitecroft.

“I understand that people are sometimes watching the fire more than they’re watching the road,” said Raine. “There have been a couple of incidents of close calls down there. Unsafe driving habits could lead to total closure of the road. So please pay attention, watch for the fire crews and no speeding.”

Schiavon also added that the public should clear their homes if they are under an evacuation order, as a scenario in which firefighters have to rile people out due to imminent danger is not a good one.

SPMRM has been working in close collaboration with Sun Peaks Resort LLP (SPR) in preparation. Schiavon said that if a fire is threatening the community, SPR will move its snow makingcannons to guard the propane tanks in the Burfield area and guard key infrastructure in the Village.

This latest wildfire has been devastating for resort businesses, including resort. It has cancelled its key areas of operation—including the bike park and golfing (for non-residents)—until Thursday, with an announcement expected then for its Friday and weekend plans.

Small businesses are reacting in the best way they see fit; while some are closing, some staying open, and others limiting their hours.

Kevin Tessier, owner-operator of Voyageur Bistro, said that the impact is especially hard-felt, given the challenges associated with COVID and the recent heat wave.

Given that some of his staff has already vacated the resort, Voyageur Bistro is non-operational at the moment, though he is still sticking around to see where he can help out.

“I just stay there, just in case a phone call comes like, someone needed ice or whatever,” he said, adding that he’s hoping that he can help feed some of the teams of firefighters.

“Right now I just want to help in some way. Right? And we’re unable to.”

On top of the challenge is the fact that we are only at the start of the summer, he added.

“The other scary thing is that this behaviour in the forest is happening extremely early this year,” he said. “We’ve a long way to go to get to the end of summer.”

To stay on top of the news, alerts and orders, please keep an eye on SPIN’s website, as well as SPMRM’s, and the TNRD’s. The public is also encouraged to download the VoyentAlert! app, a multi-purpose communication service used to send alerts to residents, businesses and visitors during critical events like fires or floods. 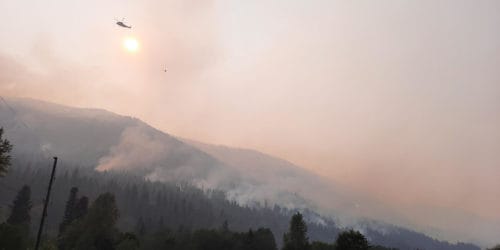 Embleton Mountain fire has been stopped before the Heffley Louis Creek Rd. in several places