The Embleton Mountain wildfire continued to make its way down the western side of the Whitecroft Valley, though its speed and aggressiveness appeared to be significantly diminished by steady water bombing from BC Wildfire Service helicopters.

Sun Peaks Mountain Resort Municipality (SPMRM) Mayor Al Raine said over the course of the day the wildfire dropped around 150 to 180 vertical metres towards the valley floor from where it was this morning, with some “fingers” of the wildfire now as close as 150 to 200 metres from the valley floor.

The area where the wildfire is burning down the mountainside is approximately one kilometre from the northern extremity of Whitecroft.

Raine added while the Embleton Mountain wildfire is still categorized as “out of control” by the BC Wildfire Service, it is now “not burning as aggressively as before.”

“There is still fire there, but it’s not burning as aggressively as before,” said Raine.

Raine added the fire is contained by the Louis Creek Rd., and that BC Wildfire Service Crews are stationed there and ready to fight.

The last size estimate of the Embleton Mountain wildfire by the BC Wildfire Service was given at 4:45 p.m. and pegged the fire at 290 hectares. Earlier in the day, at 12:30 p.m., the wildfire was estimated at 250 hectares.

According to BC Wildfire Service, 24 firefighters fought the fire today, with the support of 3 helicopters.

Raine said most of today’s efforts were from helicopters at the top of the mountain, which aimed to wet down the upper ridge area of the wildfire, so the fire doesn’t go over Embleton Mountain and towards Heffley Lake.

Once that issue was addressed, firefighters started working on the lower slopes on the east flank of the wildfire (towards Whitecroft), and by the end of the day, helicopters were dropping water on the north flank of the fire, according to Raine.

Earlier today, the SPMRM’s Emergency Operation Centre called an evacuation alert, meaning all people within the municipality boundary must be prepared to leave at a moment’s notice.

Raine said this alert was called mostly in relation to the highway to Kamloops. The concern being that the Embleton Mountain wildfire could come down towards the highway.

“There is a risk that the fire could come down to the main access highway, and if that were the case then that would mean either using the forestry road emergency exit, or trying to beat the fire down the road,” said Raine.

SPFR has a protection agreement with Whitecroft and crews from the service have been in Whitecroft since the wildfire was first detected.

Raine said they are doing protective work, such as watering down certain areas, as well as preparing for any potential fire fighting in the community.

Meanwhile, residents of homes surrounding Heffley Lake must be ready to leave immediately. They are subject to an evacuation alert, meaning they must be prepared to leave at a moment’s notice. You can read more about their evacuation alert here.

Earlier today, three additional properties in this area were given an evacuation alert: 6100, 6180 and 6289 Upper Louis Creek Rd.

Going into another night, Raine said given the nature of the Embleton Mountain wildfire, he doesn’t anticipate the need for a rapid evacuation of Sun Peaks (though this is a scenario that the public is asked to be prepared for just in case).

“I think the team has handled the situation as well as they could have,” said Raine of today’s efforts.

“I don’t think at this point people should panic. They will be given lots of notice if [the public] has to leave.” 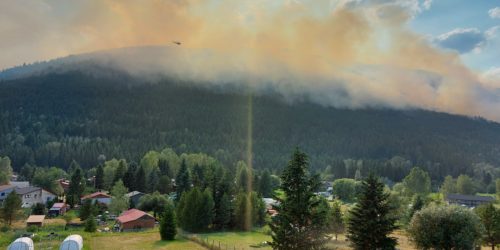