New size estimate is 466 hectares, with most of that growth to the west, says BC Wildfire Service
Joel Barde  | July 12, 2021
0 shares

A BC Wildfire Service (BCWS) post states that the observed fire growth in the past 24-hours has been up-slope to the west away from Whitecroft.

The size has not been updated since last night’s estimation of 466 hectares. Helicopters are being utilized to bucket hot spots in problematic areas. Crews are working with the structure protection unit to protect properties and are working along the Heffley-Louis Creek Road to fuel manage the area.

The McClure forest service road (northeast of the fire) and the Mount Embleton trail (southwest of the fire) are being assessed for control line feasibility. Heavy equipment will be working to complete a fire guard from Whitecroft to the gravel pit on Todd Mountain Road.

A new estimate of the size of the Embleton Lake wildfire shows it has grown significantly since yesterday, but the BC Wildfire Service (BCWS) said the growth has been concentrated to the west—away from the community of Whitecroft, which is currently under an evacuation order due to danger from the blaze.

“So the updated size is 466 hectares—and that is still an estimate—but looking at the map, the growth has been in the west, so moving up the mountain,” said Hannah Swift, a fire information officer with the BC Wildfire Service.

“It’s mostly moving up the mountain.”

Today saw a redoubled effort to attack the wildfire with helicopter water buckets. Two helicopters could be seen dropping water on the blaze, starting in the early hours of the morning and continuing late into the evening. (As of 8 p.m. they are still working.)

Swift noted the fire is largely burning in difficult and steep terrain, with unstable slopes that pose a risk to firefighters.

Some of these firefighters—members of the BCWS’s Structual Protection Unit—have mobilized on properties within the evacuated area, specifically those on the Heffley Lake side of the fire.

They are equipped with fire hoses and water trucks.

In Whitecroft, firefighters have been carrying out fuel management work on the Heffley Louis Creek Rd., the portion that runs north along the Whitecroft valley.

This area is also being used as an important staging area for the BCWS and Sun Peaks Fire Rescue in the event the fire does enter the community.

As previously reported by SPIN, over the course of yesterday the wildfire dropped about 150 to 180 vertical metres towards the valley floor from where it was in the morning, with some “fingers” of the wildfire reaching as close as 150 to 200 metres from the valley floor.

The area where the wildfire is burning down the mountainside is approximately one kilometre from the northernmost extremity of Whitecroft.

Meanwhile, firefighters are preparing to head off the fire on the north side of the fire. They are looking at setting up on McClure Forest Service Rd., where they hope to set up fire barriers.

“It’s mostly a lot of scouting at this point, and getting situational awareness,” said Swift. BCWS firefighters are “figuring out the best place to put in heavy equipment machine lines.”

Meanwhile, residents of homes surrounding Heffley Lake must be ready to leave immediately.

Yesterday, three additional properties in this area were given an evacuation alert: 6100, 6180 and 6289 Upper Louis Creek Rd.

SPMRM officials are asking anyone who is not a full-time resident to refrain from coming to Sun Peaks at this time.

The section of Sun Peaks Rd. from Whitecroft to Sun Peaks is currently open for travel to full time residents only.

All key Sun Peaks Resort LLP mountain operations were closed today and will be closed tomorrow as well. The golf course will be open for local residents on a walk-in basis for nine holes. You can read the resort’s statement on this here.

Editor’s note: We’ve clarified the part of the story where we discuss the start time of the helicopters to say that the helicopters began in the early hours of the morning. 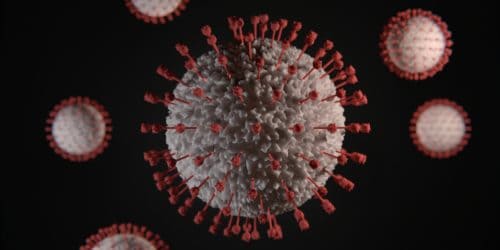 No vaccine clinic in Sun Peaks this week 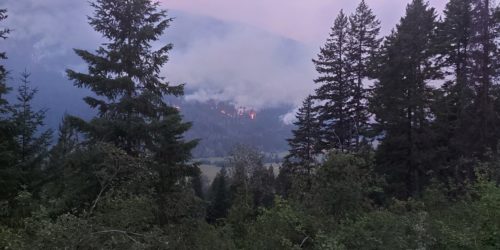